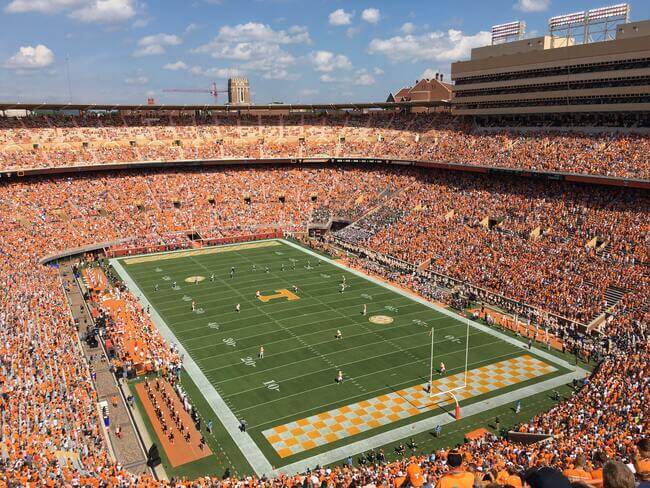 The team primed to pull off the CFB Week 4 upset of the week is Florida. The Gators (+300) will head into Knoxville as 10.5-point underdogs looking to pull off the upset over Tennessee (-385). If they’re going to do it they will need elite play from quarterback Anthony Richardson, and their defense will have to find a way to shut down Tennessee’s high-powered attack.

Last week we missed badly on our upset of the week. We took Nebraska to beat Oklahoma in a shootout, and they ended up losing 49-14, even after taking an early lead. We’ll look to move to 1-1 after a tough start to our upset of the week articles. It’s a guarantee that Florida will put up a much more competitive showing in this one.

Florida had a tight win over South Florida last week. The team did not play their best and ultimately needed a botched field goal attempt in order to hang on. This is how things go for Gators football now. They’ll surprise you with an upset win one week and then play down to the level of their opponent shortly after. Saturday’s contest should be no different as they come into Tennessee as big underdogs.

Florida has won 5 straight over the Volunteers, including two that came in Knoxville. Tennessee has had a lot of trouble with handling their rivals recently. This year, Tennessee has a much better offense then what we’re accustomed to seeing from them. They started the season unranked but an upset road win over Pittsburgh catapulted them up the polls. They’re now the eleventh ranked team in the country, which is the highest they’ve been since they came into the 2016 season at #9.

Their fast start has been highlighted by quarterback Hendon Hooker’s outstanding play. Through three games he’s averaging 281 passing yards and has thrown 6 touchdowns. Tennessee will be trying to use Hooker as much as they can against Florida. They will likely be throwing the ball early and often. If Florida’s secondary can step up and force a couple turnovers it will be huge in helping the Gators pull off the upset.

Tennessee has yet to face a quarterback as dynamic as Anthony Richardson. Richardson will be the key to this game. As he goes, so does Florida. In their opening victory over Utah, Richardson had an efficient passing game, but where he really dominated was on the ground. Richardson led the Gators by running for over 100 yards and reaching the end zone 3 times. Many thought Richardson would contend for the Heisman Trophy after this performance, but a disappointing last two games have quieted those expectations.

Florida’s running backs have been able to run the ball efficiently through the team’s first 3 games. Montrell Johnson Jr. has run for 240 yards while averaging 9.6 yards a carry. True Freshman Trevor Etienne has also been outstanding. The brother of Jacksonville Jaguars running back, Travis Etienne, has averaged 7.5 cards a carry through his first 3 games of the season. It doesn’t stop there. Nay’Quan Wright also has the ability to bust it open for a big gain. The running attack of Florida is one of the best in the country and will present problems for Tennessee’s defense. Florida’s game plan will be to run the ball on early downs and put together long drives. If Tennessee can force them into third and longs, Florida will have a tough time moving the ball down the field.

Hendon Hooker and Tennessee will get the scoring started with a quick touchdown drive, following a Florida punt. The Gators will respond with a long drive of their own where we see their rushing attack go to work. Anthony Richardson will pick up a couple of key first downs with his legs on critical third downs. Their drive will stop near the goal line, forcing Florida to settle for a short field goal. The defenses will stand relatively strong for the next quarter and a half. Then the two teams will head to the break with the Volunteers leading 10-6.

Tennessee will begin the second half with a touchdown drive to go up 17-6. With the Florida offense needing to get something done, Anthony Richardson will deliver with a 6-and-a-half-minute touchdown drive to pull the Gators back within striking distance. The Florida defense will force a punt, giving the offense a chance to take the lead. They’ll drive down the field but it will stall after Richardson misses wide receiver Ricky Pearsall on a deep ball that would have been a sure touchdown.

The game will head into the fourth with each offense looking to take control of the game. After having a strong first quarter, Hooker is kept quiet by the stout Florida secondary. This will continue after Tennessee begins the fourth quarter with a quick three-and-out that will force them to punt out of their own end zone. Florida will have good field position but they’re only able to get a field goal and have to give the ball back to Tennessee down by 1.

The Volunteers will turn to their running game for their next drive. Jaylen Wright hadn’t had many carries to this point but the ball carrier pushes his way through the Florida D-line for a few first downs. With the Florida defense on their heels, Hooker drops back on his first pass attempt of the drive and throws a pick. It’s Jalen Kimber that intercepts the pass and returns it into Tennessee field position.

Florida will strike big on this opportunity, as Montrell Johnson Jr. reaches the end zone for the first time. A two-point conversion stretches the Gator lead to 7 with 2:31 remaining in the game. Tennessee is able to put together a few first downs on their next drive, needing to score a touchdown. A couple of incompletions and an Amari Burney sack kills their momentum and Tennessee is stuck with a 4th and 18. Hooker lets it rip on 4th down but it goes off the outstretched hands of one of his top targets, Jalin Hyatt. This final play seals the CFB Week 4 upset for the Florida Gators.

It wasn’t always pretty but Florida wins their sixth straight game over their rivals from Knoxville. The win will save Florida’s hopes of an SEC East Title and put them in a good position entering their schedule’s home stretch.