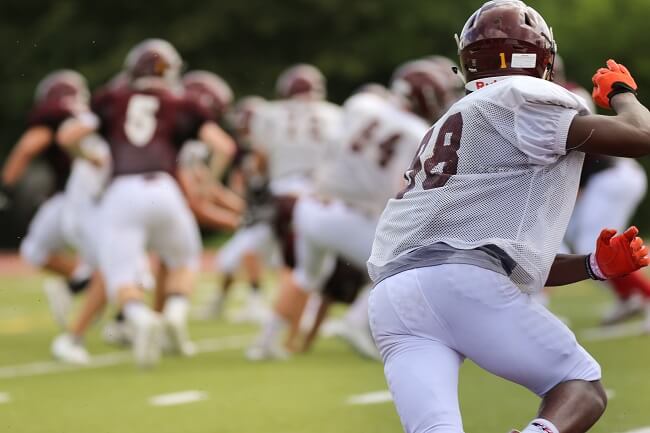 Welcome to Twelve in the Box. Here, you will see twelve teams making the biggest impact on college football. Is this a ranking?  Not really—you won’t find any numbers by the team names. Is this a power ranking? Sort of, kind of. The Judge, here, will use his arbitrary sliding scale of indiscriminate factors to present the twelve teams (and three alternates) Your Honor thinks you need to be paying attention to.

We are starting to separate the wheat from the chaff as we enter Week 4 and conference slates begin. Week 3 did not give us the same drama as Week 2. However, we were still able to identify who’s real, who’s a pretender, and who we need to see more from. The 2022 college football season truly begins now.

Twelve in the Box Odds powered by Fanduel.

There hasn’t been a more dangerous program than Alabama with something to prove. The nailbiter in Austin may have been what Nick Saban needed to capture his team’s full attention. The Crimson Tide scored on a long pass, an interception return, and a punt block all in the first quarter. Louisiana Monroe was not expected to put up much resistance, but Alabama made sure to put it away early.

If you are still looking for a reason why this Alabama team won’t win another national championship, the offense was not without its struggles as Bryce Young threw two picks.

Next Game: vs. Vanderbilt

This team has been worth the price of admission for three weeks in a row. After a Week 1 thriller against North Carolina and a Week 2 road upset over Texas A&M, the Mountaineers found a way to deliver again. This time with a 53-yard Hail Mary as time expired to beat conference foe Troy with College Gameday in town.

You truly cannot make this stuff up. What does the rest of the season have in store for Appalachian State? Only God knows but tune in for some seriously wild stuff.

Next Game: vs. James Madison

Arkansas is 3-0 and top 10 in the polls after a scare from former coach Bobby Petrino and Missouri State. This upcoming week is the litmus test for the Hawgs against Texas A&M. A win against the Aggies will signal that the hype is real for this Arkansas team. A loss will prove the Judge correct in saying not to buy the smoke coming out of Fayetteville.

Next Game: at Texas A&M

Auburn gets a lot of flak for the seemingly never-ending chaos that surrounds its football program. While that’s true, it’s also true that Auburn subscribes to the “Get Rich or Die Trying” model of thinking. Whether you think it is delusional or not, Auburn wants to compete for championships. That is why following a blowout loss at home to Penn State, it is no longer an if, but when Bryan Harsin is relieved of his coaching duties.

It appears Harsin will make it through the season, but bad showings against Missouri and LSU could result in the coaching search officially starting in October.

Next Game: vs. Missouri

College sports are integral to so many lives because of the moments they create. Clemson defeated Louisiana Tech 48-20, but the upshot of the contest had nothing to do with the scoreboard. Fifteen-year-old Ella Bresee, sister of star Clemson defensive lineman Bryan Bresee, died last week after a battle with brain cancer. Both teams honored Ella, wearing “Ella Strong” t-shirts. Each Louisiana Tech player wrote a letter to the Bresee family expressing their condolences. The Judge has no words. Onions.

Next Game: at Wake Forest

The Bulldogs look like the best team in the country, proving that the Week 1 performance against Oregon was no fluke. The Dawgs throttled South Carolina in Week 3 by 41 points. The only team standing between Georgia and a playoff berth is Georgia.

The Dawgs will be heavy favorites for most, if not all, of its remaining games. If you want to see a great team pummel its opponents, Georgia is appointment television. However, if you want to watch entertaining football, you may want to look elsewhere. Georgia is for real, but its days on Twelve in the Box are likely over until the end of October.

Next Game: vs. Kent State

Michigan has now scored 50+ points in three straight contests after a 59-0 drumming of UConn. The obvious question is how well this Michigan team will hold up against some legitimate competition. The good news for the Wolverines is that they have yet to play down to their competition and they look like they have something to prove.

Michigan is not getting the same praise as other highly ranked teams, and probably deservedly so. However, keep an eye on Jim Harbough’s squad as the competition starts to ramp up. If we see more of the same, it will be due time to start talking about championships.

Next Game: vs. Maryland

The Buckeyes got the offense rolling early and often against Toledo. They scored on each of their first six possessions and racked up a gaudy 763 total yards for the game. CJ Stroud displayed why he is a true Heisman contender, connecting on 22 of 27 passing attempts for 367 yards. Like others atop the polls, we will see what this Ohio State team is made of once conference play starts. Currently, signs point to few teams, if any, being able to keep this team from the playoffs.

Next Game: vs. Wisconsin

The Ducks have rebounded from their abysmal Week 1 showing against Georgia with a 70-14 win over Eastern Washington and a 41-20 win over BYU. What do we make of this Oregon team? Look no further than their quarterback, Bo Nix, who threw two touchdowns and ran for three more against the Cougars. While impressive, history shows that with Good Bo also comes some Bad Bo. Stay tuned.

Next Game: at Washington State

Many talking heads put Southern Cal on upset alert ahead of their Week 3 matchup against Fresno State. The Trojans were having none of that and routed the Bulldogs 45-17 while putting on an offensive display. Caleb Williams threw for two touchdowns and ran for two more. He showed why he was a crown jewel in the transfer portal over the offseason.

At this point in the season, USC looks like they should be the favorites to take home the conference title. Not to mention, make a bid for a playoff appearance.

Next Game: at Oregon State

Unless you are a Volunteer fan, you probably didn’t watch Tennessee’s 63-6 win over Akron. That is understandable as Tennessee’s style of play lends itself to big blowouts over overmatched teams. You will need to tune in next week, though. Rocky Top is buzzing, and rival Florida is coming to town. We have seen some unbelievable finishes from these two teams over the years, so get your popcorn ready. However, something tells me this one won’t be so close.

Next Game: vs. Florida

We all know that the Bama hangover is real, but luckily the Longhorns were able to shake it off by halftime. After an early 17-7 deficit, Texas outscored UTSA 34-3 to win with a 41-20 total.

While the quarterback situation is less than ideal for Texas, running back Bijan Robinson is carrying the offensive load. If the Longhorns can keep the ship steady until Quinn Ewers returns, hopes for a conference and playoff run remain.

Next Game: at Texas Tech