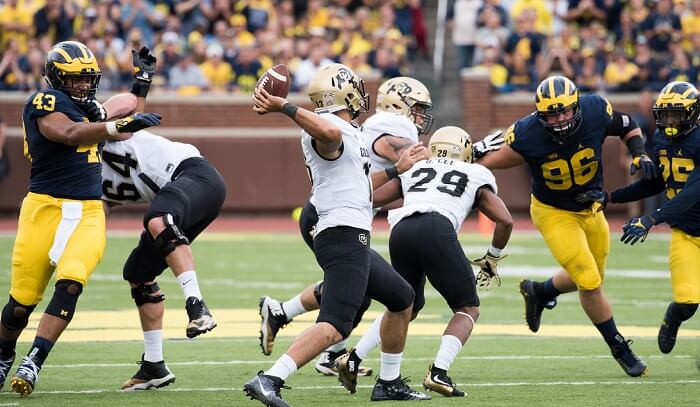 Welcome to Twelve in the Box. Here, you will see twelve teams making the biggest impact on college football. Is this a ranking? Not really—you won’t find any numbers by the team names. Is this a power ranking?  Sort of, kind of. The Judge, here, will use his arbitrary sliding scale of indiscriminate factors to present the twelve teams (and three alternates) that Your Honor thinks you need to be paying attention to. Let’s dive into our final unique ranking of 2022 and CFB Bowl Game Preview.

Catch your breath—we made it. The grind of the 2022 college football season is over. In a season that gave us the most parity since 2007, we saw the rise and fall, and sometimes rise again, of several teams over the course of fourteen weeks. We now get to enjoy the aftermath with a competitive playoff and bowl games everyone should be excited for.

Prayers from Alabama faithful and final pleas from Nick Saban went unanswered as the Crimson Tide were placed just outside the top four during Sunday’s selection show. The two regular season losses were just too much to overcome. Especially in a season that is considered disappointing for those who have grown accustomed to seeing Alabama in the playoff.

While those in Tuscaloosa may see that the Tide was on the losing end of a zero-sum season, there is still one more game to be played. Alabama will take on the Big 12 champions Kansas State in New Orleans on New Year’s Eve.

Dabo Swinney squashed any quarterback controversy after Clemson’s second drive in the ACC title game against North Carolina. DJ Uiagalelei was benched for freshman Cade Klubnik and didn’t see the field again. Clemson then scored three straight touchdowns on the way to a 39-10 victory over the Tar Heels. If there were still any questions after the game, DJ Uiagalelei is now in the transfer portal.

Clemson will take momentum from a great performance into the Orange Bowl, where they will play Tennessee.

Prime Time goes to Colorado. Deion Sanders, the man who elevated Jackson State to the national stage, is now on his way to Boulder, Colorado. He will attempt to do the same thing for the Buffaloes.

There is no doubt that national media will be centered on this program during the offseason. The question is whether Coach Prime Time can replicate his success on the P5 level against schools with equal resources. Who is PAC, if Deion Sanders isn’t PAC?

There is a clear favorite to win the national championship and that team resides in Athens, Georgia. The Dawgs put up a fifty-burger on the LSU Tigers in a game where Georgia flexed its 5-star muscles. It looks like Kirby Smart has his team peaking at just the right time, too.

Clenching that top spot in the rankings was a big deal for Georgia. They got first choice for their semifinal venue and will only have a quick commute to Atlanta. There they will take on a wounded, but talented, Ohio State team for an opportunity to defend their title.

Kansas State once again did more with less, winning the Big 12 championship in a revenge game against undefeated TCU. The attention is on how close TCU came to another amazing comeback, ignoring the Wildcats’ efforts to prevent just that. It would’ve been easy for Kansas State to fold after giving up an 11-point lead and seeing their defense being gashed by TCU’s Max Duggan. Chris Klieman’s team found the strength to bow up at the goal line, giving their offense the chance to win it with just a field goal. They’ll have a chance to knock off another top-5 team when they take on Alabama in the Sugar Bowl.

For a half, Michigan fans likely mulled whether their playoff bid could survive a loss to Purdue. Luckily for the Wolverines, that was a fleeting thought and Michigan pulled away from the Big Ten West challenger. The win put the final stamp on the playoff resume and they will have the pleasure of playing TCU in the national semifinal. Even though they were a peg below the top-ranked Georgia Bulldogs, there likely won’t be many Michigan fans upset about avoiding an immediate rematch against Ohio State.

Name a team that had a more efficient week than the Ohio State Buckeyes. The Big Ten East runners-up moved into the playoffs by doing absolutely nothing. Beneficiaries of a USC loss, Ohio State will continue its quest towards a national championship. The Buckeyes did not get off scot-free, however. Any redemption story they hope to have will be well earned as they will have to beat Georgia at a not-so-neutral site, Atlanta, where the Dawgs have already played twice this season alone.

The Trojans fell mightily to Utah in the Pac-12 championship game along with their shot at making the playoff. However, USC’s season should be labelled as nothing short of successful. Lincoln Riley, in his first year at the helm, infused talent into a team that had won just four games the season prior and took them to eleven regular season wins. Excitement has been restored to the program and the Trojans will be at the top of preseason polls with Caleb Williams coming back. They get a hungry G5 challenger in Tulane in the Cotton Bowl.

The tight-rope game that TCU played all year finally caught up to them in the Big 12 championship as the Horned Frogs fell just inches short against Kansas State. The Frogs almost put together yet another comeback against the Wildcats and showed incredible resiliency, but it was not to be this time. The loss was only the first of the season for TCU, led by first-year coach Sonny Dykes, and really came at no consequence—TCU remained in the three spot despite the loss. The Horned Frogs will make their first ever college playoff appearance against Michigan in the desert.

Next Game: Saturday, Dec. 31, CFP Semifinal at the Vrbo Fiesta Bowl (+8) vs. Michigan

If you had told Tennessee fans before the season that the Vols were going to win ten games, they likely would have been ecstatic. That would be an impressive turnaround for a team that went 7-6 last season. Well, the Volunteers did win ten games, yet there seems to be a sense of disappointment around the program. That is understandable for a team that climbed to a number one ranking in November and had a Heisman candidate at quarterback. Nonetheless, Tennessee will have the chance to end the season on a high note against Clemson in the Orange Bowl.

The Tulane Green Wave is your Group of 5 representative in the New Year’s Six. Tulane cruised to a 17-point win over UCF in the American championship, putting the Green Wave at 11-2 for the season. They will get to play in the Cotton Bowl against USC. The Trojans have received a lot of credit for their turnaround this season, but it pales in comparison to what Tulane has accomplished this season. Does the number 2 mean anything to you? Yes, it is the number of losses Tulane had this season. But it’s also the number of wins the Green Wave had in 2021. That’s right—Tulane flipped the win/loss columns this year.

Who said it’s tough to beat the same team twice? The Utes heard none of that and obliterated USC’s playoff hopes with a 23-point win over the Trojans in the Pac-12 championship. They’ll try to capture that 11th win against Penn State in the Rose Bowl. No, the Utes were not part of the playoff conversation due to two losses before mid-October but take a second to think about just how close they were. Two of Utah’s three losses were by a total of six points. There is no consolation for close losses, but the pre-season billing for Utah was not made in vain.