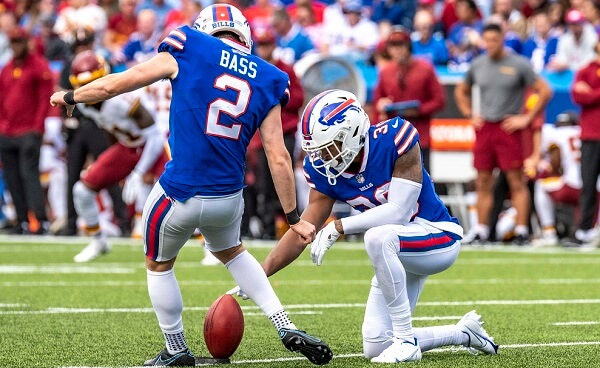 The Buffalo Bills (8-3) and New England Patriots (6-5) will play their second straight Thursday game after suiting up on Thanksgiving. For the Bills, a victory would move them atop the AFC East, while a loss would send them down to third. For the Patriots, a win would put them right back in the thick of things in the division, while a loss would significantly hurt their chances of making the playoffs. This is a crucial game for both teams in a crowded and competitive division. Let’s dive into this Bills at Patriots TNF preview.

The Buffalo Bills beat the Detroit Lions 28-25 in an offensive shootout on Thanksgiving. A hard-fought game by both teams, but Buffalo prevailed with the help of some poor Dan Campbell clock management. Josh Allen has shown a lot of heart and determination as he plays through an elbow injury.

This was a big win for the Bills and helped them in their playoff push. They are currently 8-3 and in second place in the AFC East. The Bills haven’t faired well in the division this year, currently sitting at 0-2 with losses to Miami and New York.

The Patriots lost a 33-26 uncharacteristically sloppy game against the Vikings on Thanksgiving. Poor play on special teams and several dumb penalties prevented the Patriots from pulling off an upset. The major turning point in the game was the completely unnecessary roughing the kicker penalty that gave the Vikings new life. The defense also struggled at times, allowing Kirk Cousins to throw for 299 yards and three touchdowns.

It was a disappointing performance all around, and it’ll be interesting to see how the team bounces back against Buffalo.

The game on Thursday will be broadcast on Amazon Prime Video, with game time set for 8:15 pm ET. Al Michaels, Kirk Herbstreit, and sideline reporter Kaylee Hartung will be on the call. You can listen to the game locally on 98.5, The Sports Hub in Boston.

Stefon Diggs: We saw star receiver Justin Jefferson carve up the Patriots secondary on Thanksgiving. Stefon Diggs will be in an excellent position to do something similar Thursday night in Foxboro. Expect the superstar wideout to be heavily targeted against the Patriots.

Jacobi Meyers: Meyers has been the most consistent wide receiver on this roster for a few years now. Expect him to get a good volume of targets on Thursday, making him a great option in PPR leagues. He got banged up last Thursday but ultimately returned to the game. If he starts, he’ll produce.

Patriots’ Defense: As we know, the last time the Patriots defense faced the Buffalo offense, it didn’t go too well. While we expect a better performance than they had in the Wild Card game, lean to the safer bet for a defense in week 13. The floor is too low when facing a top offense like Buffalo.

Devin Singletary: The Patriots have been stout up front all season, and that was on full display when they held Dalvin Cook to 1.9 yards per rush on Thanksgiving. The Bills will run the ball to set up the pass, don’t expect much from any of the Buffalo backs on Thursday night.

After a sloppy game in Minnesota, we’ll see the Patriots bounce back with a huge win. The Bills aren’t invincible like we thought they’d be after the first three games. Taking a leap of faith here, but give me New England.

From a betting perspective, the three best bets here are the Pats moneyline, ATS, and the under. It depends which way you want to bet but personally, I’d ride with the Patriots outright to win because you can get it at plus money.