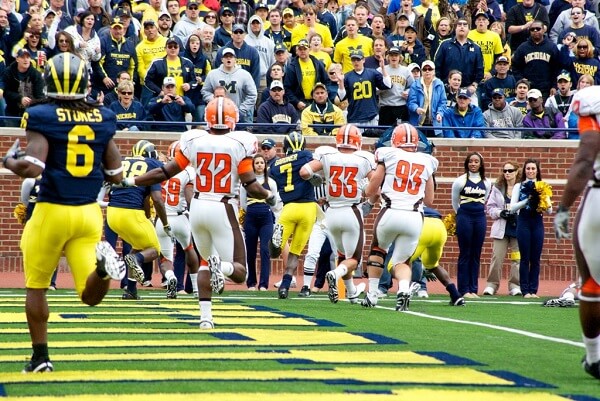 We have finally reached midweek MACtion! There is no longer a question of what to do with our Tuesday and Wednesday nights, because the Mid-American Conference football has us covered for the foreseeable future. There’s only a 4-game slate this week. You can be sure that the MAC Daddy will have his eyes glued to the television while his wife yells at him to take the trash out. Now you’re probably wondering what to bet, well MAC Daddy has you covered. Here are the best Week 10 MACtion picks.

This line opened at Kent -3.5. However, it has already moved three points in favor of the Golden Flashes in twelve hours since the line opened! Ball State will be looking to rebound off a loss against Eastern Michigan, who ended their 3-game winning streak. Kent is coming off a game against the lowly Akron Zips, who they beat by a 33-27 score. The offense of the Flashes is producing consistently, putting up 30+ points in three of their last four in-conference games.

Ball State has only covered in two of their five MAC games so far this season. The betting public doesn’t seem to put much faith into them to cover this week on the road. On the other side, Kent has yet to cover an in-conference spread this season.

Tuesday is a good spot to take the Flashes at home. Kent State hasn’t lost at home yet this year and will contain a Ball State offense that struggles to score points.

Buffalo continued their impressive 2022 by beating the conference-favorites, the Toledo Rockets, by a 34-27 tally this past weekend. They rallied from a halftime deficit of 20-7 and forced Toledo to commit six turnovers in the win. Buffalo quarterback Cole Snyder has passed for 1,907 yards with 12 touchdowns and five interceptions in 8 games this year. That is quite an impressive stat line.

They have also covered the spread in each of their last five contests. They’ll be looking to keep that streak alive when they travel to Athens, Ohio to take on the Bobcats. Ohio is having a pretty good year as well, playing to a 3-1 MAC record so far this season. Not to mention, going 4-0 ATS in this same span.

While Ohio boasts a good record, they’ve had some very close calls due to their ineptitude on the defensive side. Ohio is allowing over 500 all-purpose yards per game, ranking 131st in the FBS to this point. While they’ve been able to eke out some impressive wins, it usually comes at the expense of the ‘under’ bettors.

The ‘over’ has hit in six of the Bobcats last seven home games. When these two teams meet up, the point total usually tends to go over as well. Rather than try to take a shot at which of these teams will break their impressive ATS streak, take the Over, and bank on these offenses to continue to put up points.

The Chips came into this year with high expectations and have had a largely disappointing year up to this point. Last game, they got smoked 34-18 by Bowling Green in a game in which they committed four turnovers. Central Michigan is averaging a lowly 25.3 points per game, putting them 90th in the FBS in scoring offense. On the other side of the ball, they have mustered just two turnovers the entire season. This is not a good way to prevent your opponent from driving down the field on you time after time.

Northern Illinois suffered defeat in their last game, losing to the Ohio Bobcats 24-17. What stood out was the fact that the Huskies were able to limit the Bobcats scoring. Especially since this is a team that normally has no issue moving the ball up and down the field.

Northern Illinois is the more talented team on both sides of the ball so far this season. The Huskies currently have both of their quarterbacks, Rocky Lombardi, and Ethan Hampton, listed as questionable on the injury report. Whoever ends up playing at quarterback for NIU, they should be able to cover this less-than-a-touchdown. Especially against a Chippewas team that is starting to falter. Games involving Central Michigan have gone under the point total in five of the last six, largely because of CMU’s failures on offense. Huskies to the house in this one!

Boy, do I feel stupid for taking an over in a Western Michigan Broncos game in 2022. At the time this was written, the Broncos rank 112th in scoring offense, tallying a lowly 20.8 points per game. In their last game, they won against a banged-up Miami Ohio squad 16-10. Western Michigan put up 304 yards of total offense, which is on pace with what they do on a weekly basis.

The Broncos are expected to roll with quarterback Treyson Bourguet this week against Bowling Green. This would be his first start of the season. He threw for 123 yards as the backup last week.

The Falcons have been in great form over the past month, going 3-1 straight up and against the spread. They beat up on Central Michigan last week, winning by a score of 34-18. Bowling Green’s Achilles heel this season has been their defense, which is allowing over 34.5 points per game on average. Luckily for them, they are going up against one of the more inept offenses in the country on Wednesday.

While Bowling Green games usually go over, expect an ‘under’ scenario in this matchup against Western Michigan. The Broncos offense has been so poor that they had to resort to benching Week 1 starter Jack Solpek in favor of a true freshman. On the other side of the ball, the Broncos have a very solid defensive unit by MAC standards. That should cause a lot of problems for the Falcons.

Bowling Green has posted some impressive point totals in 2022. However, they have a knack of disappearing offensively when faced with a mismatch. Expect Bowling Green to win in a defensive struggle here.