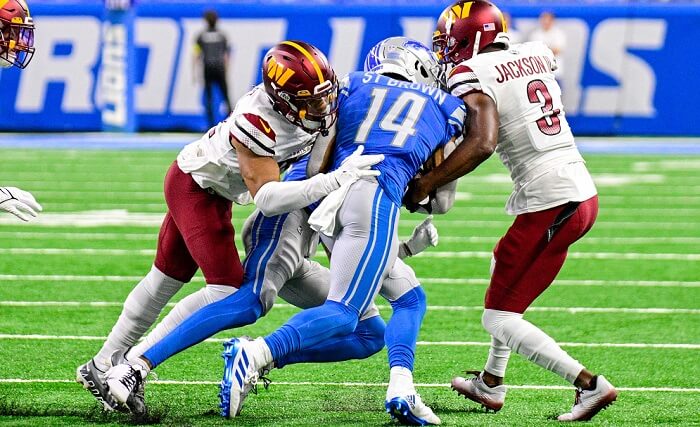 The 2022 NFL season has been a wild ride. However, having eclipsed the middle point and the trade deadline, much more is becoming clear. In regards to players, a few are having big sophomore slumps. Those players include Najee Harris, Rashod Bateman, and Mac Jones – for obvious reasons, you won’t find any of them below. On the other hand, we’ve seen consistency or an emergence from most of the players in this NFL week 9 player props. We’ve jumped headfirst into these games, siphoning out my favorite plays for the NFL slate on Sunday.

Josh Allen is an absolute monster, and incredibly fun to watch play football. His passing and rushing yard prop is juicy this week, at only 319.5 yards. He is on the road against a Jets team that is surprisingly good on the defensive side of the ball. However, this Bills team has been able to do what they want, when they want offensively, and that’s going to continue Sunday.

Allen has gone over this number in every game this season, and let’s not start betting against that number this week. This offense is clicking, and it’s lead by their MVP front runner at quarterback. Allen will rip off 30-40 yards on the ground and he’ll surpass 300 yards through the air in the Meadowlands. Lock this in and cash that ticket.

Wide receiver Amon St. Brown is a good player, but his streak of huge output ended weeks ago. Additionally, his situation isn’t going to get any easier when the Lions face the Packers this week. This bet comes down to two things to make this an easy play on the under. First, he will likely see a lot of Jaire Alexander, who is a top 3 cornerback in the league. Second, he hasn’t topped this number since Week 3 and has only gone over this number twice this season. New England and Dallas were able to completely take him out of the game, and Green Bay has a good defense themselves.

This won’t be a very high scoring game. It’s surprising to see the game point total as high as it is at 49.5. I just can’t buy into that this week. The Packers can’t move the football, and if the Lions don’t have to, they won’t take chances on offense. Game flow will keep this total under even if St. Brown can beat the coverage. Expect him to finish the game around 55 receiving yards and consider other options in your fantasy leagues this week.

This guy has been on fire since the Jags traded his backfield competition away, topping 76.5 in three straight games. He’ll have another juicy matchup on Sunday. Las Vegas does rank 10th against the run this year, however they are still giving up 108+ yards per game. In the last three, they’ve given up 115 yards per game. They have been better on the road, giving up 106 YPG. However, that’s enough room for the #1 back for the opponent to still get to 78 yards on the ground.

Etienne is seeing the field very well right now, going over 100 yards in two straight games. This game also has a high total on it and expect there to be points in Jacksonville Sunday. Etienne is averaging 5.7 yards per catch against AFC teams and over 6 YPC at home. This has all the makings for another big game by the former Clemson Tiger.

We are picking the books off with this one. This line is set low for a guy who gets 2-3 targets a game most of the time. He’s on the field a lot, playing over 60% of the snaps. He has also gone over this number in all but three games this year. Of those three, he did get two targets in two of those games, meaning he had his chances. He is also running over 60% of the routes out of the backfield.

Certainly, competing with the receiver talent on the Dolphins is tough. However, against this Bears defense Mostert should get his opportunities to get us a measly 9 yards through the air.

Stefon Diggs (-120) – Diggs is the Cooper Kupp of the AFC, and his quarterback loves him. Lock it in.

Justin Jefferson (+100) – He’s due, and he’s way too good to not score against this secondary.

AJ Dillon (+165) – This guy hasn’t gotten a touchdown in a while, so this is the week. Plus, the Packers only have so many options and this game has a weirdly high total on it.

Raheem Mostert (+115) – If you can’t tell, this is the guy this week against the Bears. He gets into the end zone, maybe even on a reception!