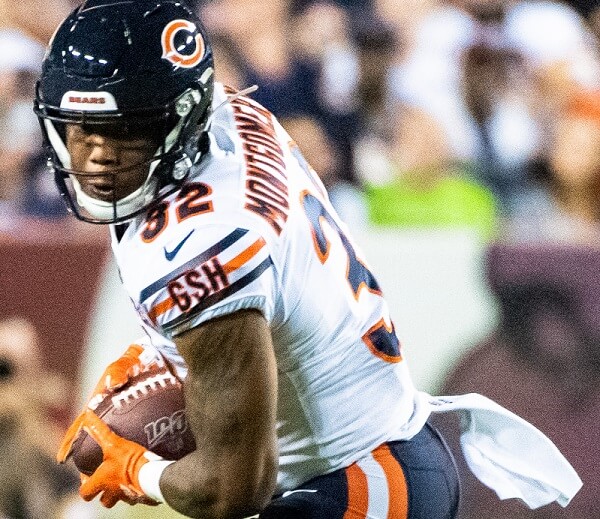 Oh NFL, how fickle you can be. As we hit the halfway mark in the season, it’s clear who’s who and what’s what with most teams. Tom Brady and Aaron Rodgers are both toast. There are five teams that are legitimate title contenders. Also, no one seems to want to help us Eagles fans out with victories over the Giants or Cowboys. Following the arrival of bye weeks, and the injury bug running rampant, here are the best NFL Week 8 Player Props. There are the four props and anytime touchdown scorers that I’m investing in this weekend.

Montgomery has been a bright spot for the sputtering Chicago Bears this season. This prop bet is based off of knowing that Khailil Herbert has been getting his share of the carries for this offense. Not to mention, Fields does tend to keep in RPO situations, and the Bears play the Cowboys defense this week.

Dallas has an incredible defense, and they’ll load the box to try and make Fields beat them with his arm. Fields is going to have trouble behind an offensive line that is frankly not very good. All signs point to a disappointing performance from Montgomery this week. Montgomery has played in six games this season and has gone under this total 3 times. Expect him to do so again on Sunday. Bet on another lackluster performance out of the Bears and subsequently Montgomery as well.

This bet is a play on my confidence that the Eagles are going to demolish the Steelers. Hurts has been a beast this season and has gone over this total three times this season so far. However, he shouldn’t need to use his legs a whole lot on Sunday.

Philly is a huge favorite, and Hurts isn’t going to have any trouble slinging the ball around the field. Plus, Miles Sanders should have another big game. The Steelers aren’t terrible against the run either, and will contain Hurts even if he wants to run. Let’s not sleep on the fact that 47.5 yards on the ground is still a lot for a quarterback. Hurts is going to break a long one, and he’ll end the game with around 42 rushing yards to give us a good sweat.

Kirk Cousins is quietly having himself a pretty good season, and Arizona kind of stinks. Cousins should have his way this weekend against an Arizona team that ranks 25th against the pass. Over their last three games they have surrendered an average of 262.3 yards.

The Vikings have the 10th best passing offense, putting up 242 YPG, with that number jumping to 271 at home. This game also has the 3rd highest total on the board this weekend, which means the sportsbooks are expecting points. This will mean a lot of passing attempts from Kirk Cousins. The Vikings should be playing with the lead, which will make us sweat this a little bit more. However, when you have a receiver like Justin Jefferson catching passes, quarterback overs typically feel good. Cousins will flirt with 300 passing yards on Sunday, in another magical 1pm time slot performance from a player that could be mistaken for your local librarian.

Trevor Lawrence is facing a Broncos team that despite being woefully horrendous on offense, has been pretty good on defense. They aren’t getting blown out of games, and they won’t this week either. Defense isn’t going to win a championship here, but it’s going to keep them in it. Lawrence has led the Jags with an average of 22 completions per game and has only dipped under 20.5 twice. One of those games was still at 20 completions. He’s had over 40 attempts twice, most recently against the Giants, who also have a good defense.

The line set at 20.5 is just too low here. Trevor Lawrence is an elite talent, and a rising star in the NFL. Following the Jags trading away James Robinson to the Jets, there will be even more pressure on Lawrence to sling the ball around the field. This is an easy cash on Sunday, and one of my favorite plays.

AJ Brown (+105) – The Eagles offense should feast on the Steelers this weekend, and Brown is due for a TD dance in the endzone

Justin Jefferson (-120) – Jefferson is going to have a big game this weekend, and he’s going to be hitting the griddy at some point. Probably before halftime.

Jaylen Waddle (+135) – Remember this guy? He caught 100 passes last year and in many critic’s eyes, is better than the Cheetah. He will score on Sunday.

Cooper Kupp (+105) – VALUE ALERT: Holy smokes, we can get plus money on a Kupp TD? Sign me up. The Rams will bounce back against the 49ers this weekend behind a big performance from Cooper.