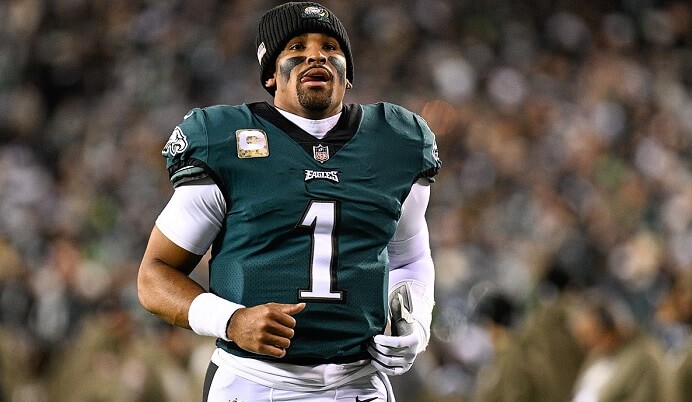 Another week in the NFL season means another slew of player prop options. Betting player props takes a lot of time in the lab, pouring over player stats and data. That or just being damn lucky. Either way, we’ve done the thinking for you with our Props for thought (Best NFL Week 14 Props). Just tail these bets and watch them cash.

Jalen Hurts is firmly in the MVP discussion, and the Eagles quarterback currently sits with a record of 11-1. The Eagles head to MetLife Stadium this weekend to face their division rivals, the New York Giants. Although the Giants rank in the middle of the league in terms of pass defense, they have been significantly better at home. This is a team that allows less than 200 yards per game, 198.7 in fact, to the opposing team when on their home turf. Contrarily, they are horrendous against the run, allowing 158 YPG at home, and ranking 26th in the league overall in that category. That, combined with the Eagles commitment to the run game, points to an under for his passing prop this weekend. Hurts can be a prolific passer, like he was last week, however this is a different type of game. The Eagles will take advantage of their ability to run the ball, control the clock and play with a lead. Hurts simply will not have to throw the ball very much to lead his team to victory. 228.5 is a number that Hurts has gone under in 3 of his last 5 games as well. It’s also important to consider the total on this divisional rivalry game of 44.5. There aren’t expected to be a lot of points scored in this game, which also reinforces the notion that the Eagles will be very run heavy on Sunday.

Garret Wilson and Mike White are clicking right now, and it’s coming through to cash some tickets. We were on him to go over his total last week against the Vikings, and he showed up in a big way, reeling in 8 of his 15 targets for 162 yards. Wilson benefitted from New York playing from behind most of the game against a potent Vikings offense, and the situation won’t change this weekend against the Bills. Not only are the Bills at home where they lead the league in scoring at 34 PPG, but they will be motivated from their previous loss to this Jets team. The Bills are going to come out firing on Sunday, and you can expect the Jets to have to throw it to catch up, because their running game isn’t good. White is going to be looking for Wilson early and often in this game to try and keep pace with the Bills. Additionally the Bills are 17th against the pass this year, so look for the Jets to try and exploit that weakness on Buffalo. This guy has hit 2 straight overs on his receiving prop and the books haven’t adjusted to him yet, so take advantage now before they do.

Deshaun Watson returned to football last week, and looked exactly like we expected him to look after 700 days away from the game. He played like garbage, and thankfully faced a putrid Houston Texans team that is worst in football. Likely because of his inability to throw any meaningful yards, he scrambled seven times for 21 yards. Of all the things he didn’t do well last week, running wasn’t one of them. Watson has always been a talented runner as a quarterback, having quick feet and a good burst. For his career he averages over 5 YPC, and with a rushing total of 25.5, you can expect him to get over that number against the Bengals. By the numbers, he needs to run 6 times to get there, and the Bengals run D ranks in the middle of the league, and that’s nothing to be concerned about. The Browns are going to run the ball, and that will include designed runs by Watson as well as one or two true scrambles in which he is most dangerous. Get this number now before it moves upward, and cash a ticket on this number with sneaky value.

Jalen Hurts (-105): He won’t pass a ton, but he’s going to run the ball. He’s the best goal line back in the league, and he gets in the endzone.

Gabe Davis (+160): Lots of attention on Stefon Diggs means opportunity for Davis. Great plus money number on him this week.

Isiah Pacheco (+115): Most people dropped him after a disappointing start to the season. Then CEH went on IR and he started to break out, so now he’ll punish us for dropping him. Also, he’s the #1 back on the Chiefs – he’s going to score.

Chris Godwin (+220): This guy has been a target monster for a few weeks now, and if not for a holding call would have scored last week. He gets that back this week at a great plus money number.

Tampa Bay Defense (+950): The 49ers are starting Mr. Irrelevant, and the Bucs have a good defense. They capitalize on that and get a turnover for points this week.

Jerry Juedy (+1300) – Score 2+ TDs: Courtland Sutton is doubtful, so someone is going to have to try and help the Broncos not get blown out. Juedy will have a monster game out of nowhere this week.