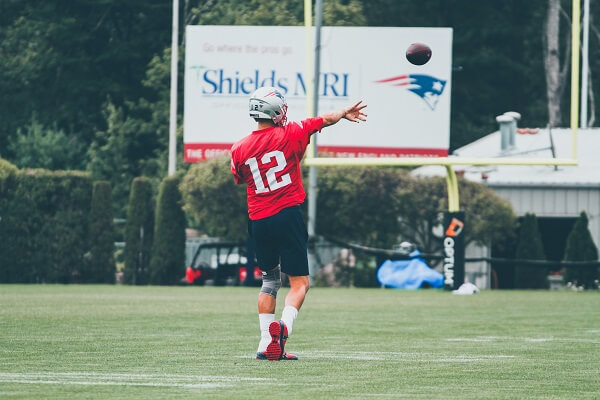 By now your fridge is certainly stocked, your jersey laid out, and you’ve accomplished nothing at work this week. Don’t worry you’re not alone. Summer was a wonderful time, but nothing beats week 1 of the NFL season. At this point we’ve made our way through most of the futures except NFL Player Award Futures.

If you’ve been paying attention over the past month, you know our favorites to win their division. Plus, the best bets for Super Bowl futures and win totals. Now that it’s officially week 1 of the NFL, here is one man’s best bets for NFL Player Award Futures.

Brady is coming off a career year in which he threw for 5,316 yards and 43 touchdowns. Since 2019, Tom Brady’s numbers have gone up every year. How do you bet against this guy? This year, you don’t. The Bucs and Brady lost their future Hall of Fame tight end in Rob Gronkowski. Though the Tight End room lost Gronk, they are certainly not lacking in that department. In the offseason they added veteran Kyle Rudolph to back up the 31-year-old Cameron Brate. Missing Gronk hurts, but there’s a lot to be said about having two veteran tight ends.

Brady should truly be grateful for the stacked wide receiver room. Tampa Bay went out and acquired a new slot receiver in Russel Gage from Atlanta and All-Pro Julio Jones. Gage is coming off back-to-back 700+ yards receiving seasons. Not to mention he runs a 4.42. Having him in the slot lining up with Mike Evans and Chris Godwin must look like heaven for Brady.

Year 23 is going to be a special one for Tom Brady. The 45-year-old is coming for MVP #4 and this bet is hitting for NFL Player Award Futures.

You can expect to see a ton of grit this season from Justin Jefferson. Jefferson is going to dance himself to an Offensive Player of the Year award. He’ll do this while simultaneously leading the Vikings to their first NFC North title since 2018.

The MVP award is usually an assigned quarterback award, while OPOY usually goes to one of the skilled positions. Jefferson went for 1,600+ receiving yards last season while scoring 10 touchdowns. Usually, we’ll see a sophomore slump from star rookies, but this kid’s ceiling is still getting taller and taller. Most of the experts and fantasy rankings have Jefferson as the #1 receiver this season.

Expect Jefferson to fully surpass both above numbers on his way to his first Offensive Player of the Year award.

Bet365 has the best value for this NFL Player Award Future

It truly pains any Eagles fan to choose a Dallas Cowboy to win an award, but this is Parsons’ year. There will be no sophomore slump for Micah Parsons. Parsons was in the running last year, but no one was taking that award from TJ Watt. Especially, after Watts historical season that saw him record 22.5 sacks. Parsons was no slack though coming in with 13 sacks as a rookie. With a year of experience and another offseason under his belt, the second-year linebacker is going to demolish last season’s numbers. The Cowboys’ defensive coordinator knows he has an elite pass rusher in Parsons and expect to see some different looks this year.

Chris Olave is the best pick for Offensive Rookie of the Year. Olave was drafted to a great situation. He will be lining up alongside Pro Bowl wide receivers, Jarvis Landry, and Michael Thomas. Not only does he get to learn from those two, but also has minimal pressure to perform from day one. Olave will be a surefire wide receiver 3 to begin the year. He’s going to get several open looks from quarterback Jameis Winston as defenses will naturally collapse to Landry and Thomas.

Olave had 900+ receiving yards and 13 touchdown receptions in his Senior season at Ohio State. It’s going to be exciting to see what this kid can do on Sundays. Not only will Olave win Offensive Rookie of the Year, but don’t be surprised if this kid is wide receiver 2 by the end of the season.

If you’ve been reading along the past two months, then you know I am high on the Vikings this season. They are my pick to upset the Packers this year and win the division. I also have Justin Jefferson finishing as the top wide receiver in the league. All this leads to Minnesota overachieving and landing themselves a top 3 seed in the NFC.

This team has a stud running back in Dalvin Cook and a two-headed monster at receiver in Jefferson and Thielen. Not to mention the most underrated quarterback in the league, Kirk Cousins. Cousins gets no love but has casually thrown for 4,000+ yards in 6 of the last 7 seasons. Expect him to turn it up even more this year.

Considering all the above, the Vikings star players will be to thank when Kevin O’Connell wins Coach of the Year.

NFL Comeback Player of the Year: Christian McCaffrey, Running Back

For this NFL Player Award Futures pick, let’s stay in the NFC South. A truly healthy Christian McCaffrey could be competing for Offensive Player of the Year on a regular basis. Unfortunately, injuries have plagued the star running back throughout his career. McCaffrey started his career with three straight seasons playing all 16 games. Since then, he has only played 10 total games over the past two seasons.

Luckily for CMC, he’s only 26 years old and still has a lot of miles to go.

Heading into 2022, the situation is strong for CMC. Carolina has a promising wide receiver duo in DJ Moore and Robbie Anderson to go along with a new quarterback in Baker Mayfield. Carolina’s passing game, which includes a heavy dose of McCaffrey, will be very much improved this season. Baker Mayfield still has solid football left in him and expect this to take some of the load off McCaffrey. Defenses won’t be able to solely play the running game against the Panthers now. It’s also been made clear that head coach Matt Rhule won’t be overusing his star running back.

The new quarterback, solid receiver room, and a lighter work load all leads to Christian McCaffrey having a big year. He’s going to overcome the injury bug this year (knock on wood) and provide a huge spark to Carolina. CMC will be your 2022-23 Comeback Player of the Year. Grab this bet now as there is still good value in the NFL Player Award Futures odds.