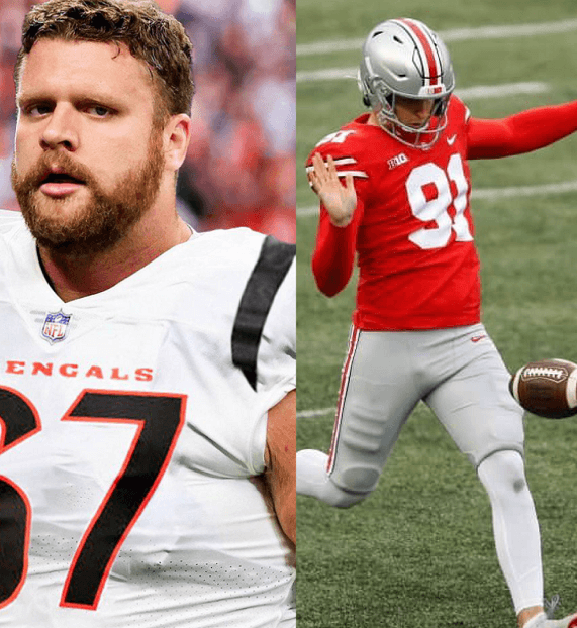 The Bengals silenced the Chiefs yet again on Sunday, as they put together another fantastic performance to beat the Chiefs for the third straight time. Local Ohio expert, Matt McAdow, covers the big win plus interviews with Ted Karras, Drue Chrisman, and the growing Bengals Betfred partnership.

Joe Burrow, Samaje Perine, Ja’Marr Chase, Tee Higgins, Germaine Pratt, and the rest of this team truly put together 4 quarters of elite football. Paycor Stadium was nearly as loud as it was during the playoff game last year, as this was a tight game and a win that we truly needed. Cincinnati currently sits at 8-4 and they are still tied with the Ravens for first in the division, with the Ravens currently winning the tie breaker.  This Cincinnati team doesn’t back down to any opponent and I believe they just might win the division, despite their ridiculous schedule to end the year.

Ted Karras kindly joined Matt’s Take for a Q&A to discuss his work with “The Cincy Hat” and his experience so far in Cincinnati.  As all Cincinnati fans know by now, Ted is an offensive lineman for the Bengals and is quickly becoming a fan favorite. Ted was drafted in 2016 by the Patriots and is a two-time Super Bowl champion. Karras knows what it takes to be a championship caliber team and his experience and grit up front is exactly what this Cincinnati team needed this year.

Outside of football, Ted is working on a project called “The Cincy Hat” with his good friend, Matt Renie. Ted and Matt developed a very unique Bengals hat and proceeds from the sales support The Village of Merici, which is an Indianapolis nonprofit that provides services and housing for adults with developmental disabilities. The hats have quickly gained popularity and Merici is planning to expand, so with each hat sold, finances are increasingly helping this cause.

Head over to thecincyhat.com to order your hat or donate today!

Q: What are you most proud of with The Cincy Hat so far?

A: “I’m most proud of bringing exposure to a really important topic. Every time I tell someone about Merici, I’m immediately met with someone telling me about their friend or relative who has intellectual disabilities. So many families struggle with finding a safe and supportive environment for their family members, and Merici has played a huge role for them. I’m so proud of Ted using his platform to bring exposure to an important part of many people’s lives that doesn’t get talked about often.”

Q: How did you come up with the awesome and creative custom design?

A: “I actually wasn’t involved in the product development at all. Ted’s family friend in Florida owns a golf supply company and asked if they had ideas for a good gift he could bring his teammates. They helped with the design and came up with a really great hat that the team and Ted’s friends loved immediately.“

Q: Do you have plans to expand and what is the website where people can donate or buy hats?

A: “We have a million ideas floating in our heads, but we’ve got our hands full prepping the 3,000 hats we’ve sold, so we’re staying focused. Ted has a huge few weeks upcoming and we all have one dream in mind: A Bengals Super Bowl run. We want to keep the project running for as long as possible if we can keep delivering an awesome product to support a great cause. Anyone can donate or buy hats at TheCincyHat.com!”

Q: Being a 2-time Superbowl champion, you know what it takes to win a Super Bowl. How does this Bengals team compare to your Super Bowl champion teams that you were on?

A: “This team is very well run and extremely disciplined. From day 1 as a Bengal, it was obvious that we have one goal in mind: to win championships. Similarly, we have incredible leaders in our head coach and quarterback. I’m so lucky to have this opportunity and I know this organization has a real shot.”

Q: Being a third generation NFL player, how much do you enjoy watching football with your family and discussing past experiences?

A: “Some of my fondest memories to this day are learning the game from my family. We are all students of the game. We love the nitty gritty details, we love competing. It’s literally been the center of our lives as my dad was a college head coach growing up. Growing up around those teams was awesome.”

Q: Who is the most energetic teammate in the Cincinnati locker room?

Q: The offensive line as a whole has improved each and every week. Can you feel the chemistry improving week after week?

A: “Absolutely. Everyone has been performing well. We’re communicating well, we trust each other. We know if we do our job that gives us a much better chance at winning. We’re laser focused on giving our passing game the time it needs and opening holes for some huge weapons we have in the backfield.”

Q: You and Matt are doing a great job with The Cincy Hat.  What are you most proud of so far with this project?

A: “I’m proud of how fast we got this up and running. We went from idea to execution in 2.5 weeks. We’ve got an awesome team at Village of Merici supporting as well and we couldn’t do it without them. They were onboard with the project from Day 1 and it’s been really fun to be more involved with the team.”

Cincinnati Bengals punter, Drue Chrisman, also joined Matt’s Take this week for a Q&A. Drue is a former Buckeye and Cincinnati native. Drue has quickly made an impact after getting “called up” recently and has averaged 52.63 yards per punt on 8 punts, with his longest punt being 65 yards. Drue was a three-time All-Big Ten Conference honoree and a two-time semifinalist for the Ray Guy Award. Drue has been a great addition to the team and you can see his professionalism and work ethic every time he takes the field or does an interview.

Q: What has been your favorite moment so far throughout your college and professional career?

A: “I would be in trouble if I didn’t say proposing to my wife during the spring game my junior year, but a close second is being undefeated against TTUN and professionally is definitely getting the call up a couple week ago for my first start against Pittsburgh and coming out of there with a big win.”

Q: What has the experience been like working with Kevin Huber and competing with him on a daily basis?

A: “Kevin has been nothing but first class since the day we met. It has never really felt like a competition with him either with how helpful he has been. I think we both want each other to be the best we can be and to let the coaches make the decision on who gets to start.”

Q: Being a Cincinnati native and former Buckeye, how did it feel when you found out you were being elevated from the practice squad?

A: “Honestly no better feeling. Just felt super blessed and validated that all the hard work had paid off. Especially after what I went through last year of being on and off the practice squad it all was worth it for that incredible feeling.”

Q: If you could watch a game with anyone past or present, who would you choose?

A: “I’ve always wanted to meet Ray Guy, who unfortunately passed away recently. But I would find it very interesting to be able pick his mind of how he views the game.”

Q: How far can you throw so all of us fans can be prepared should you ever run a fake punt?

A: “I was a quarterback in high school if that gives you any idea ;).”