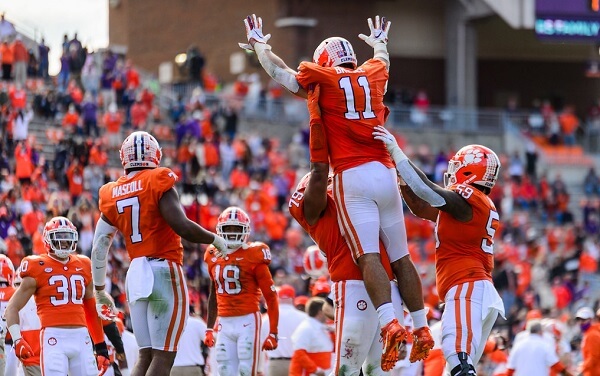 The first CFP rankings were released on Tuesday, with a few surprises. The rankings had Tennessee at one and Ohio State at two, with Clemson, Michigan and Georgia rounding out the top five. The biggest shock was the 6th place going to Alabama in place of the other currently unbeaten team, TCU. The rankings aren’t permanent, and neither are the conference title odds that will continue to shift as teams win and lose.

Clemson has established themselves as a heavy favorite in this conference after starting the season 8-0. The Tigers were a dominating force in the ACC until last year when they didn’t even make the conference championship. Dabo Swinney’s squad appears to be back this season, despite not having encouraging play from the quarterback position. DJ Uiagalelei was pulled in Clemson’s most recent contest against Syracuse after turning the ball over three times. Cade Klubnik anchored the team’s comeback win, but Uiagalelei will be back under center against Notre Dame this Saturday.

North Carolina is the only other team with a reasonable shot at taking home the ACC crown. The Tar Heels are pretty much a lock to wrap up the coastal division, which would give them a date with Clemson in the ACC Championship. Quarterback Drake Maye has thrown for 29 touchdowns against only 3 interceptions in what has been an incredible season for the freshman quarterback. Maye deserves to be getting more attention in the Heisman race. However, if he keeps up the good play, he could end up being one of the candidates in New York. North Carolina will have the quarterback edge in a matchup against Clemson. That makes them a good bet with their current ACC odds at plus money.

TCU has surprised a lot of people with their 8-0 start. The outstanding play of Max Duggan and Kendre Miller has made the Horned Frogs the favorites in the Big 12. The offense is averaging 44.3 points a game, good for fifth in the nation in that category. TCU’s ability to outscore their opponents makes them huge threats to make noise in the college football playoff race. They lead the third-place team in the conference by two games with four to play. For all those reasons, their chances of appearing in the Big 12 championship extremely likely.

The race between Kansas State and Texas could end up being decided this Saturday. The Longhorns will travel to Kansas to take on the Wildcats. Kansas State leads Texas by a game but a win on Saturday for Texas would give Steve Sarkisian’s squad the tiebreaker. Kansas State has looked impressive this year, especially in their most recent contest where they blew out Oklahoma State 48-0. Texas has been much better this year, but their offense has shown inconsistencies at times. TCU and Kansas State are top two teams in this conference. Either team could win, and hold great betting value to win the Big 12.

Ohio State are the favorites in the Big 10 despite Michigan also starting the season undefeated. The connection of CJ Stroud and Jaxon Smith-Njigba was supposed to be the scariest duo in college football this season. However, it has been a non-factor due to Smith-Njigba’s injury issues. Stroud has been consistent, but it’s been the running back play of TreVeyon Henderson and Miyan Williams that have helped balance the offensive attack. The game all Buckeyes fans have circled on their calendar is the one on November 26th against Michigan. This year it will be in Columbus, and once again there will be a lot more than a spot in the conference title game on the line.

Michigan won this conference last year and have started the season 8-0 with nearly all of their wins coming in convincing fashion. Yet, Big Blue is still sizable underdogs to run it back this year. The team lacks the firepower of Ohio State even with the breakout season running back Blake Corum is having. The Ohio State-Michigan matchup won’t win either team the conference. However, it will put them in the driver’s seat to do so. The winner will in all likelihood face Illinois in the conference title game. The Illini have looked good this year, but won’t stand much of a chance against Ohio State or Michigan.

After an embarrassing 49-3 Week 1 defeat at the hands of Georgia, Oregon has bounced back, and is now the Pac 12 favorite. Transfer quarterback Bo Nix has led the team’s resurgence with 31 total touchdowns and a 72% completion percentage. Oregon is 5th in the country in yards per game and is averaging 42.4 points per game. That’s a number that would be even better if it weren’t for their Week 1 dud. As the lone Pac 12 team with 0 conference losses, the Ducks definitely have the best shot at reaching the conference title game. Oregon’s odds are the best for the conference title, showing that they are the best team but have the worst betting “value”. Still, at plus money from FanDuel or DraftKings, there is nothing wrong with something that feels like a lock.

USC, UCLA, and Utah are in a tight race and are going to be dueling for the second spot. Considering Utah must play on the road at Eugene in a couple weeks, they are the least favorable bet. USC and UCLA will face each other on November 19th from the Rose Bowl. That game could very well end up deciding the final spot in the Pac 12 title game.

USC has the firepower edge with Caleb Williams and Jordan Addison leading the way, but their defense has struggled lately. UCLA holds worse odds and will have home field advantage in the head to head matchup against the Trojans. Because of this, they’re a much better bet than USC.

If you needed any more convincing that the SEC was the best football conference, well here you go. The number one ranked team in the country holds the third best odds to win the conference this year. Also, they’re significantly higher than the top two team’s odds.

Tennessee isn’t getting a lot of respect from sportsbooks, largely due to their upcoming head-to-head matchup in Athens against Georgia. The Vols will be 8 point underdogs, which is wrong. The duo of Hendon Hooker and Jaylin Hyatt is the best in college football, and no one can stop them. Georgia does have an exceptional defense, but their offense doesn’t have the kind of weapons Tennessee has. Tennessee is an easy and the best value pick in this conference.

Alabama is the other team you can’t forget about. They dropped a heartbreaker against Tennessee last month. However, they have still looked like the dominant team we have become accustomed to seeing from them. Bama has the most direct path to the SEC Championship, as they will have an easy schedule the rest of the way. Unfortunately for the teams in their way, the Tide become even more dangerous after a loss.

Considering Tennessee and Georgia still have to play each other, Alabama has the best chance to win the SEC. When you look at their current odds, they’re a solid value pick.