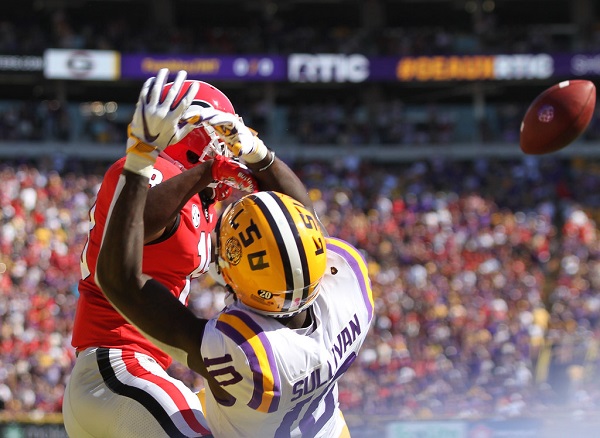 Welcome to Twelve in the Box. Here, you will see twelve teams making the biggest impact on college football. Is this a Week 10 CFB rankings? Not really—you won’t find any numbers by the team names. Is this a power ranking? Sort of, kind of. The Judge, here, will use his arbitrary sliding scale of indiscriminate factors to present the twelve teams (and three alternates) Your Honor thinks you need to be paying attention to.

Week 9 looked like a week where we might see some of the top teams drop. We saw plenty of upsets, but the conference leaders didn’t blink nor give up their positions. Even though we have most of the usual suspects featured this week, there are some teams lurking in the Big Ten, Big 12, and SEC. The playoff rankings are coming out this week, so we will turn our attention to the playoff picture as it is becoming clearer and clearer. That is, until it’s not.

The Crimson Tide are fresh off a much-needed bye week. They are now entering the portion of their schedule where they play teams coming off their own bye week. Alabama has two tough games upcoming, starting with a trip to Baton Rouge before heading to play at Ole Miss. These games come at a great time for Alabama as two road wins all but locks up a trip to Atlanta. Also, it goes a long way towards putting the Tide back in the playoff picture.

Next Game: at LSU

Clemson also comes off a bye week and should be well prepared for a trip to Notre Dame. This team has reached a critical point where they need to perform like a playoff team. Otherwise, they risk being overlooked for a playoff berth. The truth of the matter is Clemson is not passing the eye test and right now there are two teams in the Big Ten and at least three in the SEC that look better than the Tigers.

Could an undefeated ACC champion Clemson miss the playoffs? If they keep messing around, they might just find out.

Next Game: at Notre Dame

The Bulldogs had sloppy moments in their 22-point win over Florida but still got the job done against the rival. They will not have that luxury this Saturday when they host a red-hot Tennessee team. Based on the way Georgia has played this season and the landscape of the playoff picture, a loss likely knocks Georgia out of playoff contention.

There is a huge roadblock on the road to repeating. We will see just how up to the task the Bulldogs are in Week 10.

Next Game: vs. Tennessee

Michigan made light work of in-state rival Michigan State in Week 9 in a contest that eventually came to blows. That is what facing this Michigan team will do to you—make you want to punch something. The Wolverines have some areas to tighten up, like scoring touchdowns in the red zone. However, they appear to be on a collision course with Ohio State for the Big Ten East.

Next Game: at Rutgers

The Buckeyes looked to be on the ropes in Happy Valley before an incredible effort in the fourth quarter. That fourth quarter is why Ohio State is a favorite to win the national championship. However, they will not be afforded the opportunity to sleepwalk through the first three quarters on the big stage. That big stage might not even come for four more weeks when the Buckeyes host Michigan. Until then, Ohio State will look to put together four sharp quarters and most importantly, stay healthy.

Next Game: at Northwestern

The Fighting Illini are 7-1 and have sole possession of first place in the Big Ten West. That is all thanks to Bret Bielema and his smash mouth style of football. His style of football has allowed for running back Chase Brown to rush for 100 yards eight times this season. That has led Illinois to the best start the school has had since 2001.

Illinois has several challenging games left on the schedule. However, they are in prime position to earn a spot in the Big Ten championship game.

Next Game: vs. Michigan State

The Ducks have won seven straight and will, barring some sort of catastrophe, make it eight straight after they play Colorado on Saturday. That is where things get interesting for Oregon. They will end the season with games against Washington, Utah, and at Oregon State. Oregon will count on Bo Nix to continue performing like a Heisman candidate to make it through that stretch unscathed. Not to mention, win a conference championship, which they will need if they have any hope of making the playoffs.

Next Game: at Colorado

K-State made their move towards a Big 12 title with a beatdown of Oklahoma State. The word beatdown does not even begin to describe what it was. The Wildcats won 48-0 against an Oklahoma State team averaging over 40 points per game. That was also without starting quarterback Adrian Martinez.

Can Kansas State keep the momentum rolling to a spot in the conference championship game? We’ll find out Saturday when they host Texas.

Next Game: vs. Texas

Ole Miss rebounded from the loss to LSU with a solid win against a wounded, but dangerous Texas A&M team. The Rebels got running back Zach Evans back from injury to contribute an already prolific running game.

Up next? Two whole weeks to prepare for Alabama. Lane Kiffin has already shown he’s a master scribe for opening drives. Ole Miss fans are looking forward to seeing what he can draw up for the Tide. The Rebels will need his A game to keep Ole Miss atop the SEC West.

USC limped to a win against Arizona as several starters were unable to play due to injury. The bad news is most of the injuries were on the offensive side of the ball, so they cannot be pardoned for giving up 37 points to Arizona. There is still a conceivable way for USC to make a playoff, but it involves winning out. However, that could be a difficult task given the way the Trojans are currently playing.

Next Game: vs. Cal

The Horned Frogs just keep on answering the bell. The latest answer was a 41-31 win over West Virginia in Week 9. There is no rest in the Big 12, however. TCU will host Texas Tech before road trips to Texas and Baylor. TCU has a cushion in the Big 12 standings, but three wins will place the Horned Frogs squarely in the playoff picture.

Can TCU withstand these rigorous tests? There is no evidence to suggest otherwise, yet.

Next Game: vs. Texas Tech

Is this Tennessee team still improving? We’ve seen most teams who get up to beat Alabama in the regular season fizzle and accomplish nothing of significance. However, these Vols look like they are using it as a springboard. Tennessee easily handled a stubborn Kentucky team in Week 9 in which the defense joined the party. The defense held the Wildcats to 6 points and snatched three interceptions. The Vols can take yet another step with a win in Athens against top-ranked Georgia.

Next Game: at Georgia