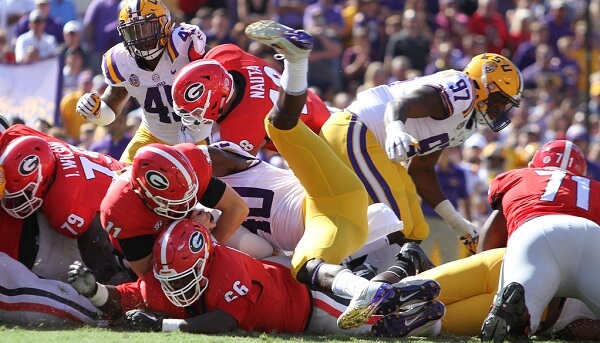 Welcome to Twelve in the Box. Here, you will see twelve teams making the biggest impact on college football. Is this a week 12 CFB ranking? Not really—you won’t find any numbers by the team names. Is this a power ranking? Sort of, kind of. The Judge, here, will use his arbitrary sliding scale of indiscriminate factors to present the twelve teams (and three alternates) that Your Honor thinks you need to be paying attention to.

The college football regular season is winding down with only two weeks left. We saw teams clench conference title berths in the ACC, Big 12, and SEC. The Big Ten and Pac-12 prepare for end-of-season showdowns to determine who will play in their biggest game. Plus, possibly even farther. The playoff race is coming down to the wire and almost certainly will leave a deserving team out this season. The only question now is who it will be.

The Crimson Tide bounced back after a loss to LSU to defeat a hot Ole Miss team on the road. Unfortunately for Alabama, LSU’s win over Arkansas clinched the Tigers’ berth in the SEC championship game. While this season will fall short of the lofty expectations that surround Nick Saban’s program, they are still worth a watch through the end of the season. Bryce Young, despite being the reigning Heisman winner, does not get the respect he deserves for what he is doing for this Alabama team.

Next Game: vs. Austin Peay

Clemson was already on the bubble for the Judge’s predicted playoff before a loss to Notre Dame. However, that loss put the nail in the coffin. Dabo’s team still boasts an undefeated conference record and will be favored to win the ACC championship game.

Now that the pressure is off for a national title run, the Tigers will start preparing for next year. That starts with restoring the confidence of quarterback DJ Uiagalelei.

Next Game: vs. Miami

Georgia flexed its muscles in Week 11 against an outmatched Mississippi State team. They outscored them 28-7 in the second half on the way to a 45-19 victory. If one thing is evident about this Bulldog team, it’s that they enjoy an abundance of talent at every position. They don’t try to get cute with play calls—they just use that incremental advantage over 60 minutes to wear the other team down. Will that talent advantage be there in the playoff?

Next Game: at Kentucky

LSU survived a cold (for the SEC), wet road trip to Arkansas and pulled out a 13-10 win over Arkansas. This win secured the SEC West in Brian Kelly’s first season. The Tigers haven’t been a big part of the playoff conversation this season but have now found a potential path. That path would of course go through the SEC East champion Georgia in the conference title game. While that seems unlikely, we must appreciate what Kelly has done in his debut season and look forward to him restoring LSU into a monster.

Next Game: vs. UAB

The Wolverines keep taking care of business week in and week out, disposing of Nebraska 34-3 in Week 11. That is good for a 10-0 record for the first time since 2006. Michigan will play Illinois next week before the game we are all waiting for. That game against Ohio State has not only conference implications, but national title implications. The winner of that game will be one of the favorites to win the national championship. At least assuming a subsequent conference championship game win against a weaker Big Ten West opponent.

Next Game: vs. Illinois

North Carolina closed out Wake Forest in Week 11 36-34. This was the Tar Heels fifth win of the season by three points or less. The win also clenched the Coastal Division title, giving Carolina a shot at Clemson on December 3rd. The Tar Heels will use the upcoming games against Georgia Tech and NC State to put a stamp on this season and sharpen up for the conference title game. Additionally, Drake Maye will have a chance to put a stamp on his Heisman candidacy.

Next Game: vs. Georgia Tech

The Buckeyes made easy work of Indiana in Week 11 in a 56-14 win, pushing the Buckeyes to 10-0 for the season. Ohio State will have to go on the road to play Maryland before the much-anticipated Week 13 bout against Michigan. Still, injuries seem to plague this program, as running back Miyan Williams was injured against the Hoosiers. The Buckeyes have been able to overcome those injuries all season, but will they eventually pay the price? Maybe this Ohio State team is good enough to persevere.

Next Game: at Maryland

Oregon saw their playoff chances disappear before their very eyes against Washington in Week 11. An incredibly risky decision to go for it on fourth down in their own territory as the fourth quarter wound down backfired as it gave the Huskies a short field to get the win in Eugene. Many will question the decision for a long time. However, the Ducks shouldn’t dwell on it because Utah comes to town in a Week 12 must-win game. Especially, if Oregon wishes to play for the Pac-12 championship.

Next Game: vs. Utah

Those who have just been waiting for the Horned Frogs to lose a game remain waiting after TCU picked up a huge road victory over Texas in Week 11. The game may not have been as high scoring as we anticipated, but a win is a win. And that makes 10 wins for the season and a spot in the Big 12 title game. TCU now will have games against Baylor and Iowa State along with a conference championship game to prove to the committee that they belong in the playoff. Right now, all signs point to yes.

Next Game: at Baylor

The Volunteers rebounded from their Week 10 loss at Georgia to beat Missouri 66-24. Tennessee is in a precarious situation going forward. They will have to sit out of the SEC title game but are firmly in the playoff conversation, sitting at number 5 in the latest playoff standings. Unfortunately, the Volunteers have run out of statement games—they will play at South Carolina and at Vanderbilt to close the season. Their hopes lie in good performances there, a strong closing performance from Georgia, and edging out the loser of Ohio State/Michigan.

Next Game: at South Carolina

UCF went on the road in Week 11 and knocked off a Tulane team who had yet to lose in the American. That was good enough to create a three-way tie atop the conference standings between UCF, Tulane, and Cincinnati. The Knights claim wins over the other two and are primed to grab a spot in the conference championship game as they will close the regular season against Navy and at South Florida. You need to get to know this team—they might just make some noise in a New Year’s Six bowl.

Next Game: vs. Navy

USC will play an elimination game in Week 12 against UCLA in the Rose Bowl. A loss means the Trojans are out of the conference championship game and playoff picture. A win puts them in the Pac-12 championship game, and they will stay alive for the playoff. Speaking of the playoff, the Trojans will need a lot of help to get there—USC’s current resume with no ranked wins is not going to get it done. Luckily, the Trojans have opportunities against ranked UCLA and Notre Dame to close the regular season and potentially a ranked opponent in a conference title game.

Next Game: at UCLA