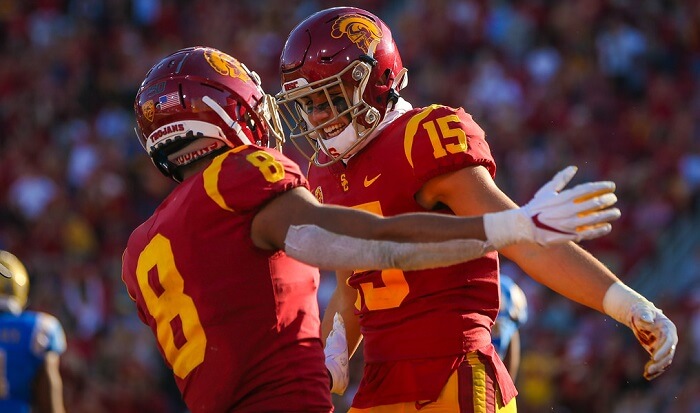 Welcome to Twelve in the Box. Here, you will see twelve teams making the biggest impact on college football. Is this a week 13 CFB ranking? Not really—you won’t find any numbers by the team names. Is this a power ranking? Sort of, kind of. The Judge, here, will use his arbitrary sliding scale of indiscriminate factors to present the twelve teams (and three alternates) that Your Honor thinks you need to be paying attention to.

Week 12 gave us some thrillers. It was a week that was almost disastrous for many of the top teams in the country. Now we roll into a Week 13 that is filled to the brim with rivalry games with postseason implications. The playoff picture was shaken up after a Tennessee loss and it’s our job to put it back into focus. The beauty of uncertainty going into Week 13 is that the playoff appears to be wide open.

Alabama cruised to a 34-0 win over Austin Peay in Week 12 to bring them to 9-2 on the season. The two-loss Tide looked like a safe bet to miss the playoff. However, there is still some ground to be gained at the top. Finishing the regular season over Auburn in the Iron Bowl would put the Tide at 10-2 with a strong resume. Especially since its two losses come on the road on last plays of the game. If Alabama wins and the right teams lose, it might be hard for the committee to deny a program with so much playoff success led by a Heisman winner.

Next Game: vs. Auburn

Clemson defeated Miami in Week 12 and will host a South Carolina team coming off a big win over Tennessee. Clemson is another team that looked dead in the playoff picture, but the Tennessee loss opened things back up. However, Clemson still sits towards the back of the line of teams looking to make that jump. Clemson, of course, would need to win out, but would also need some chaos towards the top. The good news is the Tigers will have an extra conference championship game to put on the resume that others will not.

Next Game: vs. South Carolina

Georgia survived the road trip to Kentucky in a week where many of the nation’s top teams struggled to victory. Now, Georgia will host a middling Georgia Tech team before a showdown with LSU in the SEC Championship. The Bulldogs will be a favorite in both games while being one of a few teams that control their destiny. If they win, they’re in the playoff. They might even be able to afford a loss to LSU in the conference title game. However, the Dawgs won’t want to entertain that idea.

Next Game: vs. Georgia Tech

The Wildcats did not struggle as many others did in Week 12, defeating West Virginia 48-31. Coming up for Kansas State is a rivalry game against Kansas. A win there puts the Wildcats in the Big 12 championship game. The significance of this is the opponent and implications for that opponent. Kansas State would get another shot at TCU, against whom they held an 18-point lead. The Wildcats are a win away from a shot at creating even more chaos in the playoff picture.

Next Game: vs. Kansas

LSU played a sharp, focused game against UAB in Week 12 and prevailed 41-10. The Tigers will now hit the road to face a struggling Texas A&M. With the SEC West already locked up, the Tigers are now taking steps toward a potential playoff berth. That path goes through Atlanta and Atlanta only. No doubt that LSU will need to win in Week 13, but they will also need to win the SEC championship game to get a look for the playoff.

Next Game: at Texas A&M

Michigan struggled to pull out a Week 12 victory at home against visiting Illinois. Were the Wolverines almost caught looking ahead to The Game? That answer is likely yes, as the balance of their season hangs in this one remaining game at Ohio State. While Michigan will no doubt not want to exercise this option, the question is whether a one-loss Michigan team would be a playoff team without a conference title. The same question could be posed to Ohio State, but the Wolverines’ light out of conference schedule could come back to bite them.

Next Game: at Ohio State

Ohio State would rather have put Maryland away earlier in Week 12. Nevertheless, a late field goal and garbage-time touchdown gave the Buckeyes a 43-30 win. That was all that was needed going into the regular season finale against Michigan. Ohio State will host the Wolverines with everything at stake—the Big Ten East title, a spot in the Big Ten championship game, and likely a playoff berth. The Buckeyes will be fueled by the loss in this game last year and eye a perfect regular season.

Next Game: vs. Michigan

The Ducks got another big home win against Utah in Week 12. They are now 9-2 on the year and 7-1 in conference. With USC locking up one of the Pac-12 title game spots, Oregon is in the driver seat for the second. They will have to earn it, though. The Ducks travel to rival Oregon State and must win to guarantee an opportunity to play for the conference title. Are the Ducks completely out of the playoff picture? A look up the leaderboard says it isn’t impossible, but Oregon might need something beyond chaos.

Next Game: at Oregon State

Who saw this one coming? The Gamecocks not only knocked off fifth-ranked Tennessee but put some style points on it. In doing so, South Carolina destroyed any hopes of Tennessee backing into the playoff, a proposition that had felt likely. The narrative will be about how the Vols were affected by the loss. However, you need to take a hard look at what Shane Beamer is doing with this program. He might not have been the sexiest hire, but he has this South Carolina program moving in the right direction.

Next Game: at Clemson

Wow, wow, wow, wow, wow.  TCU’s win against Baylor keeps the Horned Frogs undefeated going into their final regular season against Iowa State. Plus, a conference championship game. Wins there and TCU will be in the college football playoff. Now that we’ve mentioned that, how about that game?! Down two with a minute and a half remaining, TCU put together an incredible drive and kicked a fire-drill field goal to win the game as time expired. The Horned Frogs looked like a team of destiny in Week 12.

Next Game: vs. Iowa State

The Vols inexplicably were run out of Williams-Brice Stadium in Week 12, losing 63-28 to South Carolina. To make matters worse, quarterback and Heisman candidate Hendon Hooker went down with a torn ACL. He will miss the remainder of the season. Obviously, this loss knocks Tennessee out of playoff contention, because like it or not, it also matters when you lose. The loss also had huge implications on the playoff picture. There is a playoff berth that was assumed to be taken by the Vols now wide open.

Next Game: at Vanderbilt

The Trojans survived a thriller in Week 12 against UCLA and now turn their attention to hosting Notre Dame. They will attempt to finish the regular season 11-1. The Trojans have already locked in a place in the Pac-12 championship game with an opponent to be determined. USC will need to win both games for a playoff berth. The narrative here should be what hiring the right coach and taking advantage of the transfer portal can do for a program. Lincoln Riley has put this USC program in title contention in Year 1.

Next Game: vs. Notre Dame