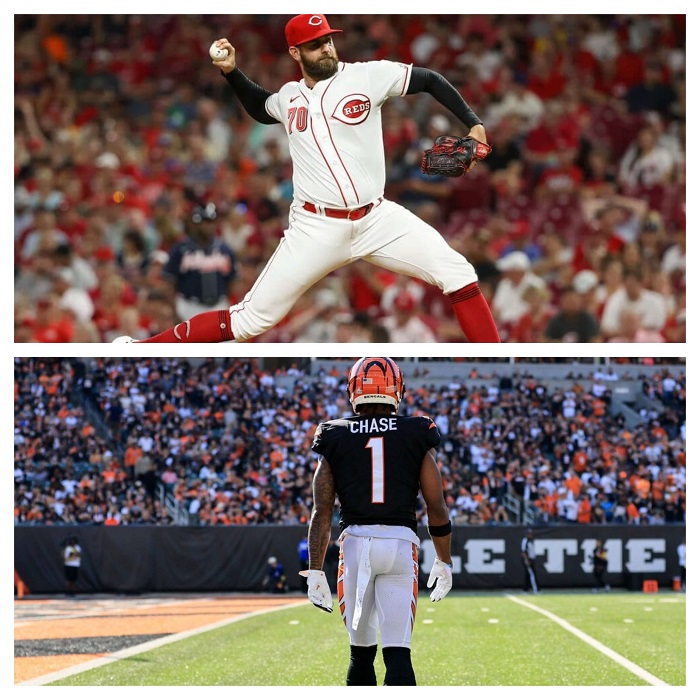 The Cincinnati Bengals broke the curse and beat DeShaun Watson and the Cleveland Browns in commanding fashion. They were able to capitalize even though they were missing Tee Higgins and Tyler Boyd. In this article we’ll dive into the remaining schedule and current AFC North odds. Additionally, an exclusive interview with Cincinnati Reds pitcher Tejay Antone.

Cincinnati pulled out a huge victory over the Browns on Sunday to end the small streak the Browns had on Burrow and this young offense with the final score being 23-10. Cincinnati was missing many key players including Boyd, Higgins, and Hurst.  Despite lacking their usual receivers, Cincinnati had a magnificent game plan, and the defense was a terror for Watson and the Browns for all 4 quarters. This week’s victory brings the Bengals record to 9-4 and they remain tied with the Ravens for first in the AFC North, as the Ravens held on to beat the Steelers (The one time we root for the Steelers, they still mess it up, right?).  Let’s take a look at the Bengals and Ravens remaining schedules to end the season:

Bengals Remaining Games: at Tampa Bay, at New England, vs Buffalo, vs Baltimore

Ravens Remaining Games: at Cleveland, vs Atlanta, vs Pittsburgh, at Cincinnati

Tejay “Captain Hook” Antone kindly joined Matt’s Take this week. Tejay is the Reds beloved 29-year-old pitcher out of Oklahoma City. Antone has been with the Reds since 2020 and is known for his dynamic breaking ball. Tejay has unfortunately been dealing with his second Tommy John surgery, but he is looking to make a huge impact with the organization this season.  Antone holds an impressive 2.48 ERA through 69 innings pitched in his 2 years in Cincinnati. I can’t wait to watch number 70 take the mound this season, as this team needs Tejay to be successful within the division. I expect to be watching many clips that Rob Friedman posts this season showing the epic breaking ball that Antone has in his bag.

Q: How is the recovery process going?

A: “Things are going well. Starting to ramp things back up to game speed and getting ready for spring training.”

Q: What are you currently working on during the off season and how are things progressing?

A: “This off season I’ve been working on my lower half being more rotational and less linear. I was having some correlating upper half inefficiencies because my lower half wasn’t working as well as it could.”

Q: What has been your favorite moment as a Red?

A: “Making the playoffs in 2020. There’s nothing better than winning and doing it on that level is exhilarating.”

Q: If you could watch a game with any former or current player, who would you choose?

A: “Barry Bonds. I would choose to pitch against him (lol).”

Q: What does this Reds team need to improve on to be contending in the near future?

A: “Age. It’s just a matter of time until we all start clicking. We have some stud veterans leading the way and teaching the rest of us the way.”

Q: What is your own personal goal for the 2023 season?