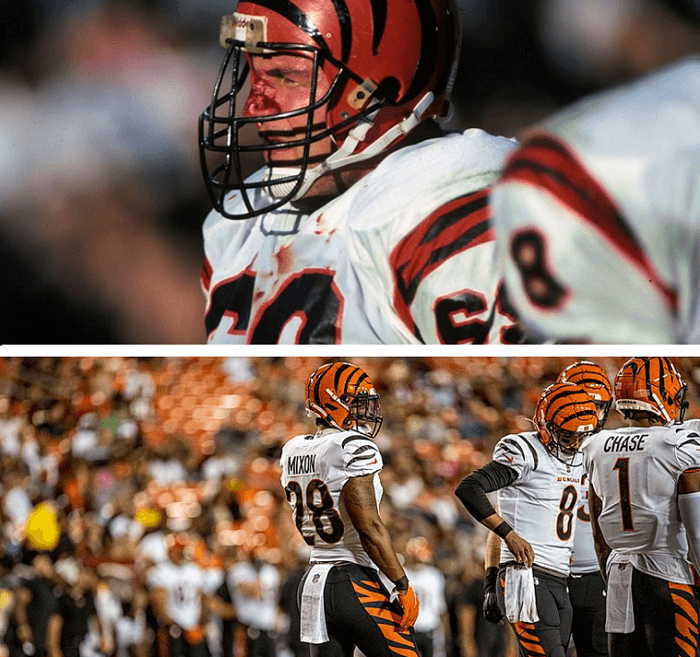 This week on Matt’s Take, a Bengals at Patriots Review of what ended up being a nail biter. Then an interview with former Bengals nose tackle, Tim Krumrie and what he thinks this team needs for a Super Bowl run. Additionally, some major moves this week with the Reds organization and how their offseason continues to shake out.

Cincinnati managed to pull out their 7th straight win in a tight one at Gillette Stadium on Christmas Eve. Most fans had their feet propped up and enjoyed the Burrow show in the first half. However, it turned into raising heart rates and standing with anxiety late in the fourth quarter. A win is a win though in the NFL, especially in late December.

Cincinnati stands at 11-4 with a crucial matchup against the Bills on Monday Night Football in just over a week from today. After starting the season 0-2, I wouldn’t believe you if you told me on Christmas that we still had a chance to get the overall 1 seed in the AFC (we will need some things to go our way). Knowing that we have already clinched the playoffs gives some relief, but Cincinnati is looking to not only win the AFC North but get that crucial bye in the playoffs. For the first time in my life, I can truly say that I believe Cincinnati is the best team in football (and truly mean it).  Hold on tight for these last 2 weeks Bengals fans, it is going to be a wild ride!

The last few days have finally involved some Cincinnati Reds action and I certainly can’t complain. The Reds “stuck to their guns” and did the right thing by officially designating Mike Moustakas for assignment. “Moose” was one of the worst contracts in recent history with the Reds, as he struggled to stay healthy and never batted over .230. “Eating” the salary is the right thing to do, as these young guys need all the experience they can get. Cincinnati also managed to sign Wil Myers to a one-year deal. The former rookie of the year will make an immediate impact with our roster and if things would happen to not work out, one-year contracts never hurt. Wil has over 940 hits in his career and Great American Ball Park should play into his favor. Cincinnati also brought in a familiar name to help at the catcher position, as Curt Casali is rejoining his former team. Curt played with the Reds from 2018-2020 and recently played with the Giants and Mariners. While his numbers are not eye catching, he is a steady backup and we know what to expect from him, as he has been in the organization before. If Krall and company can have a part 2 reunion with Johnny Cueto, then I will be happy with this roster going into the new season. I know this team isn’t going to contend by any means next season, but I think they can be competitive if health remains on their side. Two years from now, I expect the Reds to make a true push as the Cubs are doing this season.

Bengals legend, Tim Krumrie kindly joined Matt’s Take this week for a Q&A. Tim Krumrie is a 12-year NFL veteran who played his entire career in the Queen City. Tim was a Nose Tackle and is one of the hardest hitting players in Bengals history. Tim is a 2-time Pro Bowler, appeared in the Super Bowl, a member of the College Football Hall of Fame, and spent roughly 15 years as an NFL Coach. Tim is a Bengals “Ring of Honor” nominee, and many people remember him for his consistency on the field, as there was a stretch where he started 160 out 161 games. Tim has an award named after him in the state of Wisconsin for the most outstanding lineman in the state and has done so much for the game of football. I was more than honored to host him this week for an interview.

Q: What is your favorite memory as a player with the Cincinnati Bengals?

A: “The run to Super Bowl XXIII, the season as a whole coming off the strike year, starting 6-0 and the excitement of that team.”

Q: What is your favorite memory as a coach with the Cincinnati Bengals?

A: “Having Dick LeBeau as my DC and Head coach. Learning from his football knowledge, defensive schemes, and the ability to make game-time adjustments. Also, picking Justin Smith in the first round and how he immediately impacted the team.”

Q: What do you think this Cincinnati team needs to improve on to make another Super Bowl run?

A: “Sounds cliche, but just win one game at a time, stay the course, do your job, finish everything.”

Q: Do you stay in touch with your former teammates such as Boomer Esiason, Ickey Woods, David Fulcher, and Jim Skow?

A: “It’s great to see all my former teammates at Bengal events. Several attended last year’s Super Bowl and we had a lot of fun catching up. I stay in touch with a lot of guys that I coached with here as well as in Buffalo and Kansas City.”

Q: Who on the current Bengals roster reminds you of yourself and how you played the game of football?

A: “That’s easy…DJ Reader is a beast; I love watching him play. Trey Hendrickson reminds me of myself with his motor (and my wife thinks I look a lot like him when I was younger)!”

Q: As someone who played the game tougher than anyone in the league and recovered from a gruesome injury, what advice would you give to those who are injured and in the recovery process on the Bengals roster?

A: “The mental part is the hardest part. So many people told me I would never play again and that motivated me to prove them wrong. I worked hard on my rehab, always doing more and never giving up.”