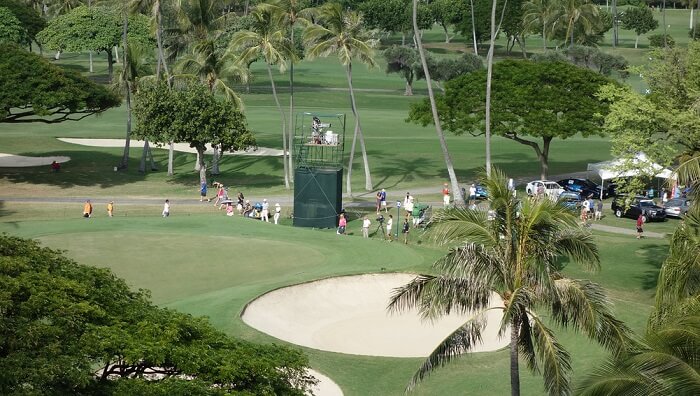 The Sony Open in Hawaii is a professional golf tournament on the PGA Tour, and is part of the tour’s FedEx Cup Series. It has been held at the Waialae Country Club in Honolulu, Hawaii, since the event’s inception as the Hawaiian Open in November 1965. Lets dive into the Sony Open preview and best pick for betting the tournament.

The Waialae Country Club is one of the easier stops on the PGA Tour ranking the 6th shortest course on the schedule. The two Par 5s will not provide much resistance as they measure 551 and 506 yards. The scoring average for the two Par 5s is 4.5 and 4.33; translation – if you aren’t birdieing both Par 5’s you’re probably getting left behind.

The main defense for the course is coastal winds, which can be unpredictable day to day. The fairway rough will be three inches in length this year, rather than 2.25 inches, so we will see how much that brings scoring down. The Par 3s have length to them as well with all four measuring between 176 and 204 yards. None of the Par 4s are drivable, twelve of them will play 460 yards or less. The tournament is usually a birdie fest with the winner usually being 20-under or lower.

Driving distance will not be as important this week as many holes will feature players hitting irons off the tee. The winner and top finishers will most likely be those who give themselves the most birdie opportunities from 120-160 yards on their approach shots and those who putt the best from less than 15 feet.

Corey Conners is my selection for my one-and-done entry for this week. This is a great course setup for Corey, who also holds a solid course history at Waialae with finishes of 11, T13, and T3 in his last three appearances. He finished T18 last week at the Sentry in a loaded field that saw 17 of the top 20 golfers in the world. This week’s field will only feature three of the top 20 (Im, Kim, and Spieth).

Competing in last week’s Tournament of Champions event helped knock some offseason rust off. This week, most golfers in the field will be looking to do the same. In most events, lack of distance off the tee is something that Conners always has to overcome with his superb iron play. However, with many golfers having to go less-than-driver this week, that should not be a problem.

An area to focus in on with Conners is the flatstick. If he putts average to above average then he will find himself in the mix come Sunday. I would also play Conners to Top 20 at even or plus money.

Henley is one of my favorite golfers in the Top 20 market, especially in weaker field events. He struggles when at the top of the leaderboard when the pressure is really on, but he consistently plays well in these types of events. Approach is the strength of his game and one of the most important attributes this week. I am playing both Henley (+110) and Conners (+115) to Top 20 at plus money odds. If we split then we still make a small profit.