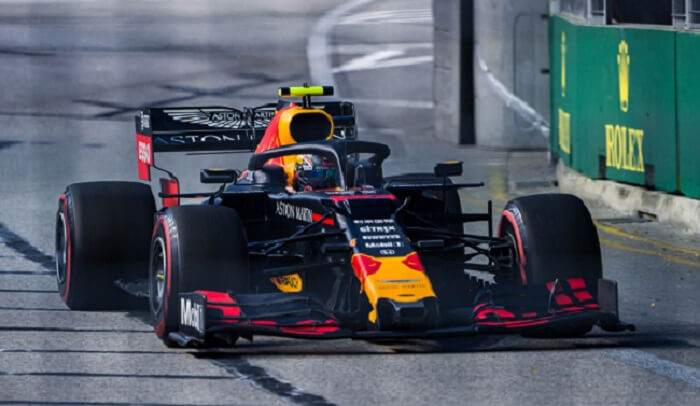 Formula 1 is back for the second week of an F1 triple header. We’ll preview the weekend and give updates following the Friday practice, and Saturday qualifying races. Also provided is a Dutch Grand Prix Odds comparison from our three favorite sportsbooks.

Formula 1 heads to the beach this weekend for Max Verstappen’s home race. This location features a tight and twisty track that harks back to the most dangerous age in the sport. Zandvoort forms a part of the ‘old school’ tracks on the F1 calendar that has only recently rejoined the sport. This track isn’t without a treacherous & deadly past. There was a long 35 year wait between races, but last year’s event was well worth it. The home crowd were rewarded with a victory from home favorite, Max Verstappen, the first time a Dutch driver had won their home race.

Zandvoort has had several alterations since the original event in 1949, mostly due to safety concerns. A major renovation before the 2021 event saw the biggest changes to the track. The race on Sunday will feature 72 laps of the 2.646-mile circuit and has 14 corners. This includes the banked Hugenholtz, Kuhmo & Luyendyk corners that are unique to the Formula 1 calendar. These banks allow for side-by-side racing at incredible speeds that will produce plenty of action.

The current weather forecast looks warm and sunny for race day. However, there could be another mixed-up grid as there is a 60% chance of rain on Saturday. Friday should be similar weather to Sunday so expect plenty of race simulations and longer runs to determine the best tires for the race. Pirelli are bringing their three hardest compounds (C1, C2 & C3) to Zandvoort. These will help to cope with the high speeds, banked corners, and lateral forces that the tires will go through.

Last week’s Belgium Grand Prix was an easy Sunday drive for the Red Bull team. Expect the fast and twisty Zandvoort circuit to provide a much sterner test for the Austrian team. Ferrari and Mercedes will stay closer to the front as the track only has one true straight and banked corners. There are gravel traps that provide drivers with little to no recovery time around the lap.

Qualifying will be key to success this weekend. Ferrari have claimed 9 of 14 Pole Positions so far this season, and they have the one lap pace to get to the front of the pack on Saturday. Don’t count out Mercedes just yet though. Their race pace has been strong all season and the teams only Pole Position came at the track that can be most associated with Zandvoort, in the Hungaroring.

Alpine and McLaren will resume their fight for fourth place in the Championship. The news of Daniel Ricciardo’s split from the papaya squad is still resonating around the paddock, especially as Alpine have a driver opening for 2023. Alonso and Ocon are driving the wheels off the French squad’s car. They’ve finished in the top 10 for the last four races and compounding the McLaren’s sudden downturn in form. McLaren will be hoping for a better race at Zandvoort than they had last year. They’ll be looking to claw some points back on the Alpine’s ahead of them.

For the rest of the grid, it’s about maximizing on the potential pitfalls that the teams above them fall into. Alpha Tauri had a reasonable Belgium Grand Prix, fighting both McLaren and Aston Martin for the last points paying positions.

A special mention must go to Alex Albon, who is outperforming his teammate and the Williams car that he drives. Alfa Romeo and Haas will be looking for an upset coupled with improved performance after a difficult return to racing in Belgium.

The first practice in Zandvoort saw several near misses and plenty of excursions across gravel traps. It ended with a surprise Mercedes front two as George Russell lead the Silver Arrows to the top of the timing sheets. Home favorite Max Verstappen broke down with a gearbox issue only 10 minutes into the session. While one Red Bull ground to a halt, the other struggled to find space on the twisty Zandvoort circuit. Finally finishing the session 0.961 seconds off the pace, down in 7th position.

This presented an opportunity for Ferrari and Mercedes to build some much-needed confidence after the resounding defeat in Belgium. Mercedes took full advantage as both drivers had superb runs to put them on top. Russell beat Hamilton by 0.240 seconds, and ahead of the Ferrari’s Carlos Sainz.

The McLaren’s also showed strong pace throughout the session to beat both Alpine’s and the second Ferrari of Charles LeClerc. Alpine struggled for overall pace and ended the session over half a second off their main rival in the championship. Alex Albon continues to push his Williams further than anyone thought was possible to round out the top 10. However, he’s still quite a distant 1.608 seconds back from Russell.

The big news entering Practice 2 was the conclusion of the Oscar Piastri contract negotiations. McLaren officially securing the young Australian’s services for next season. When the action did get under way, the Ferrari’s stormed back with a much improved second practice session. Charles LeClerc was fastest, beating his teammate by 0.004 seconds but crucially shaving 1.5 seconds off his first practice time.

Lewis Hamilton was only 0.072 seconds back from the lead Ferrari as they found speed around the Zandvoort traffic. Lando Norris and George Russell rounded out one of the closest top 5’s of the season. They were only 0.103 and 0.310 seconds off the pace respectively. Lance Stroll outperformed his Aston Martin to finish 6th. He finished under 0.5 seconds behind the Ferrari, while his illustrious teammate struggled down in 14th position.

Max Verstappen had another session to forget, but at least managed to get in some strong running. He finished down in 8th position and nearly 0.7 seconds off the pace. His gearbox failure in Practice 1 clearly affecting his confidence going into the rest of the weekend. The Alpine’s and Daniel Ricciardo’s McLaren rounded the top 10, albeit a full second behind the front runners.

A lot will be made of Max Verstappen’s and Red Bulls struggles after their dominant performance in Belgium. Verstappen’s slipups have already affected the Dutch Grand Prix Odds. However, more should be said for the resurgence of Ferrari and Mercedes that will hopefully continue through the rest of the season. Ferrari have had a strong car over one lap all season and will be odds on for Pole Position on Saturday afternoon. Both Hamilton and Russell have an outside chance though. Especially as Zandvoort contains many of the characteristics of their only Pole of the season at the Hungaroring. Verstappen may have had a difficult Friday but expect him to be back fighting for the Pole Position. I would put him as a prospect within the top 3 by the end of qualifying unless further mechanical gremlins creep into his car overnight.

That was another excellent installment of a Formula One race in 2022. The Netherlands certainly knows how to put on a show. The 110,000 strong crowd dressed mostly in Orange hardly stopped bouncing all day. If at any point they did, the local DJ group were on hand to pump back up the atmosphere. Ultimately, the crowd went home happy as home favorite Max Verstappen continued his 2022 form with his tenth race win. Plenty of drama kept the race exciting. Mercedes chased the leading Red Bull with an alternate strategy and Ferrari showed slightly better pace. Not to mention a plethora of overtakes to keep the midfield runners entertained.

Mercedes showed excellent pace throughout the race and had an almost perfect strategy to finish 1-2. However, a Virtual, and then Full Safety Car, destroyed their chances of their first win of the season. Both cars decided to start on the slower medium tires; switching to the hard tires around lap 30, before the safety cars took their race into a difficult path. If the safety cars had not been required, Hamilton was on pace for an unlikely race win.

Hamilton showed great pace on both sets of tires but was ultimately overtaken by Verstappen for the race win. Russell was a little luckier with the second Safety Car, being behind Hamilton. He switched to softs at the end to power past him to finish second.

The race began swimmingly for Pole Sitter Verstappen as he powered away from the field. However, as he started on the soft tires, he switched early to the mediums to cover both Ferrari drivers. Verstappen was behind both the Mercedes cars after his third stop. He then passed Hamilton for the lead after switching to the Softs during the Safety Car to win his home Grand Prix.

Perez struggled all weekend for pace. Following a poor start, he had a lonely race as he couldn’t keep up with the Mercedes and Ferrari’s ahead. Perez got lucky to finish above the second Ferrari in Carlos Sainz due to a slow stop and penalty.

Leclerc had a good first phase of the race and initially managed to keep up with Verstappen. However, he slowly slipped back behind the two Mercedes after the first round of pit stops. He didn’t really have the pace to keep up with the three in front of him. Like the results in Hungary and Belgium but he was able to overtake Lewis for a 3rd place finish. He made his move after pitting for soft tires and held on as Hamilton tried to come back.

Sainz had a troubled day. After passing Perez at the start of the race, things quickly unraveled. A very slow pit stop and a missing rear tire left him a long way down the field and out of contention for a top 4 finish. Sainz then picked up a penalty for an unsafe release in the pit lane for his final stop that dropped him down to 8th by the flag.

Norris had a strong race and ran ahead of the Alpines for the entire race with an excellent strategy. However, he struggled on the slower mediums after the Safety Car and was overtaken by Alonso, who switched to softs. Alonso had been tracking Norris for the entire race and looked out of the top 6. The safety car at the end really brought him back into play and eventually overtook Norris at the end.

Ocon had a lonely race with a well-executed strategy. However, he finished 0.2 secs shy of capitalizing on Carlos Sainz’ penalty and claiming another point for the French squad. Daniel Ricciardo had a miserable weekend with a poor qualifying that was compounded by being stuck at the back of the field. Not to mention a car that is simply not responding to him.

The middle stint of the triple header did not disappoint, with Zandvoort proving that last year’s Dutch Grand Prix was no fluke. Clearly this part of the world deserves to continue to host the Formula One circus. Whilst the result was predictable, the way we got there was not and another enthralling race left us ready for the next one in Italy, just 1 week away. Monza is commonly referred to as the ‘Temple of Speed’ and has the fastest lap in F1 so expect another standout performance from Red Bull. Hopefully Ferrari and Mercedes can step up and take the fight to the Austrian outfit to provide us with another fantastic spectacle at another classic racetrack.