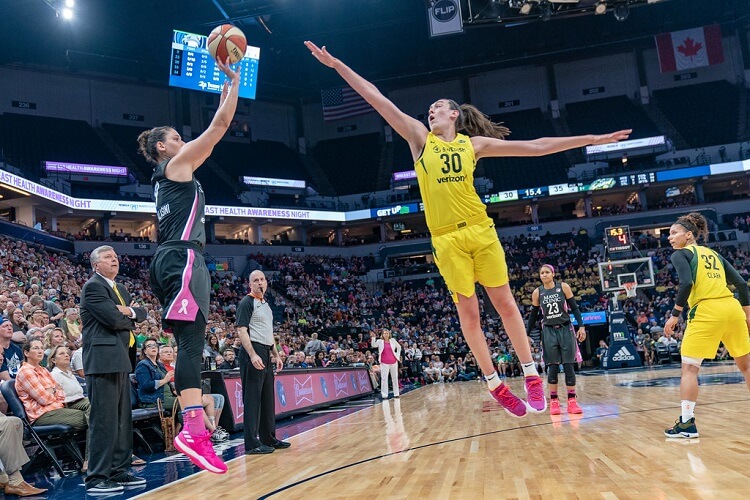 Then there were four. The WNBA playoffs continue today, with game 1’s in both the Eastern and Western conference semifinals. The first round was chalk, with the top 4 seeds moving on.

These semifinal rounds move to a 5-game series, and both series will go deep. The Aces are one of four franchises in the league to not win a title, and they are still the favorite to get it done.

Here’s an extensive preview of the games and Wicked Wagers for today’s games.

The Seattle Storm, and AP player of the year Breanna Stewart head to Las Vegas this afternoon to take on the top seeded Aces. The Aces found out yesterday that Becky Hammons won AP coach of the year. This series is absolutely loaded with talent, with more #1 overall picks than we’ve ever seen in a playoff matchup. The Aces have been building towards this for years and are poised to take this series. Expect this series to go 4 or 5 games because Seattle is no joke and won’t go away quietly.

The Aces are 3-1 against Seattle this season, having had impressive performances against one of the leagues best defensive teams. Seattle is great defensively and they have arguably the best player in women’s basketball in Breanna Stewart. However, the Aces are an absolute wagon on offense, and play fast and without hesitation. The Storm plays a slower, half-court game, while the Aces rank at the top in 3 pointers attempted and pace. I like this series to give us a ton of points and close games.

The best sportsbook to bet WNBA hoops, BetRivers, is giving a lofty total of 170.5 points. The spread has the Aces favored by 5.5. The Aces moneyline is -225, which is a heavy lift for me in the first game of a playoff series. That’s a lot of juice to give up, considering these teams are more evenly matched than the regular season series indicated.

In their four games this season, only one would have gone over today’s total line. While I believe this game goes under, I’m not running to the window (or my phone) to play the total. The books are baiting us with the over, considering the last time these teams played the total finished at 209. By setting the line so high, they are trying to tell us it’s going to be a high scoring game. It very well might be, but I’m going to lean to the under on this one.

If you have been reading along this season, you know where I’m going for my favorite Wicked Wager. If you are thinking “here he goes with another 1Q bet”, you’re right. I’m all over the 1st quarter line for the Aces, which is -1.5. The Aces are 4-0 straight up in the 1Q this year and would have gone 3-1 against a -1.5 line. Give me the best team in the league to take the first quarter by a bucket, every single time. That’s my favorite play on this game by far.

I’m also looking at the second quarter line and going the other direction. Seattle is getting +1.5 in the second quarter for this game. This is a number that would have cashed tickets in all four games this season. Seattle isn’t going to get blown out of the gym, and their second unit is better than the Aces. Expect this game to be close going into halftime, so predicted game flow lines up with both first half bets.

Ultimately, I’m going to play the full game line as well, but I don’t like the 5.5. That’s too many points. I’m going to pay a little more juice and move that line down to 4.5 in favor of the Aces. That’s a solid Wicked Wager even with a -130 price, and the Aces can cover that number.

The defending WNBA champions Chicago Sky welcome the Connecticut Sun to Wintrust Arena tonight. This will be their 3rd straight year facing off in the playoffs. Obviously, last year the Sky got the best of the Sun on route to their title.

This series is going to be super competitive. This series will go 5 games and it’s going to be a slug fest. Connecticut is a gritty team, and they have serious talent at the 4 and 5 position. They have a clear advantage at those spots; however, Chicago has clear advantage on the perimeter. The Sky are the second highest scoring team in the league led by last year’s finals MVP, Kahleah Copper. The Sun don’t have an answer for her, and she’s going to get buckets early and often in todays game. Let’s also not forget Candace Parker, who is a true stretch 4, and one of the all-time greats.

BetRivers has this line tight right now, with the Sky favored by 3.5 and a total of 165.5. The Sky won all four regular season games against the Sun this year but would have covered 3.5 only twice. Three of their four matchups went over 165.5. Chicago isn’t known for defense, and if Connecticut hits their shots, then this game will go over the todays total. Both teams can run and gun and could easily be the higher scoring game of the day. I really like the over in this one and will be playing it up to 166.5. IF that number hits 167, back off and focus on the spreads that are offered.

First, I’m laying the 3.5 with Chicago. They are terrific at home, and even though the Sun are a very good road team, there will be a rowdy crowd and a lot of energy from the home team, propelling them to a victory and a cover. I’m a broken record, but it’s been a profitable system all season, so back to the 1Q on this game. Chicago is 4-0 in the first quarter straight up and would have covered what BetRivers is giving us (-1) in 3 of those games and pushed the 4th.

I feel like Billy Mayes…but wait there’s more! BetRivers is giving us a plus money gift today and offering the Sky -1.5 at plus money. I love the Sky to win the first quarter by two and will gladly take the current +102 odds. I’m hammering the first quarter line, cashing that ticket, and then kicking back and watching the rest of the game.