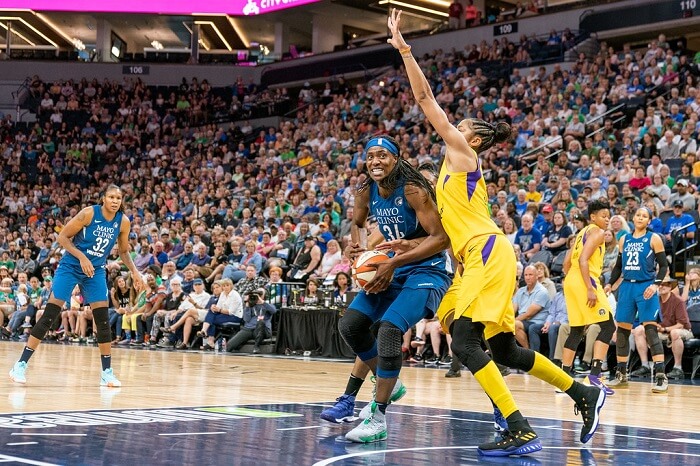 Game 2 of the WNBA Semifinal round are here. Much like the Sky and Aces, I hope to have a much better (betting) performance tonight. The term “Any Given Sunday” doesn’t just belong to football anymore.

Sunday was brutal, but we are back at it tonight with some extremely favorable spots.

The Storm was able to crack the Aces on Sunday, winning Game 1 on the road. They beat an Aces team that has been very good in Sin City this season. Seattle looked in control the entire game. After jumping out to a big lead in the first quarter, they closed the half out up 7. Las Vegas was able to get back into the game, but ultimately fell by 3. The stats were very close at the end of the game, but the difference really was that first quarter. Once Vegas was able to settle down, they won or tied the remaining quarters of the game to get it close.

The Aces shot well under their season average from deep, which was the killer for them. Going 6-23 is not good, and especially poor for the #1 3-point shooting team in the league. This game was close enough that if the Aces had gone 8-23, they win the game. Playoff basketball is like that, and this Aces team is way too good to not bounce back in game 2.

The books agree, as this line is exactly where it was for Game 1. BetRivers, which is my favorite book to bet the WNBA, has listed the Aces -6, with a total of 169, slightly juiced to the over. I like the Aces to bounce back and even this series, however that 6 might be too many points. Seattle is a legitimate title contender, and they have the best player in basketball in Breanna Stewart. Tina Charles is a huge addition, and this team can play defense. Seattle plays much better defense than Vegas, who prefer to push the tempo and outscore opponents rather than stop them.

Vegas is going to have to come out strong in this game, and because of that I’m going back to ‘ol reliable and hitting the 1Q. The line is -2, in favor of the Aces, and I’m making a play on that. Correlating with that bet is the first half line. That’s also -2, and there is a lot of value there.

If the Aces take control of this game, both bets will hit. Even if the Storm are able to keep it close, as it’s only 1 possession, we have the safety net of a push on those whole numbers.

Game 1 was an absolute slug fest. Neither team looked sharp, with both teams shooting under 38% from the floor. Both teams also turned the ball over and 3’s just weren’t falling. The Sun found a serious edge on the boards, which was expected given their size and skill in the post. Not surprising that Candace Parker was a bright spot for this Sky team, putting up 19 points and 18 rebounds. It was a historic performance, and it’s too bad it came in a loss. The Sky had their chances, as they put up 30 3’s, but were only able to hit 8 of them. It’s amazing that teams of this caliber would have such a low scoring game, and it wasn’t because of defense. It was just abysmal offense, as we saw only 1 quarter where a team hit the 20-point mark.

Expect a much different game tonight, and the Chicago Sky to bounce back in Game 2.

The books agree that the Sky should have a big bounce back. BetRivers has set the game line at Sky -4.5, however they have adjusted the total down to 163.5. I love a play on the over here. In five games this year, the over would have hit 3 times, and in the first matchup they hit 162. Chicago won’t shoot that poorly from 3 again and expect a much more aggressive approach out of Chicago in general.

Candace Parker should have another huge game. She’s going to have to, and she has a skill advantage over the Bigs on the Sun. Her points prop is 14.5, and I’m on the over. Parker has gone over this number in 4 games against the Sun this year, with her lowest output being 18 points. It directly correlates with the full game over, but also with a Sky victory. I’m also going to lean on my expectation that the Sky shoot the ball better and come out stronger than they did in Game 1. This leads me to a play on the 1Q line. At -1, it’s basically a moneyline play and I’m absolutely playing it. 4-1 against the Sun in this quarter, I like the trend and I love the Sky to cover.