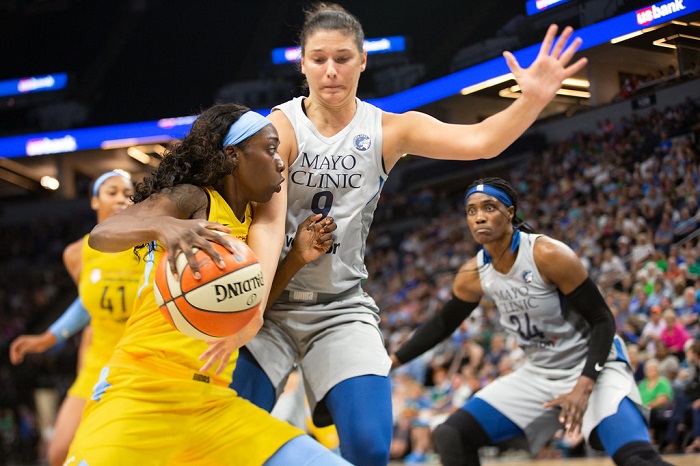 Tuesday and Wednesday night both hold deciding game 3’s in the WNBA playoffs, and both contests will be excellent. Chicago was able to bounce back in a big way in Game 2 of their series. They destroyed the Liberty and looked much more like a defending champion should. Surprisingly, the Dallas Wings waxed the Connecticut Sun, setting up what will be a good Game 3 in that series.

Two of the best guards in the league square off tonight. Kahleah Copper and the Chicago Sky hit the streets of New York for a deciding game 3. Chicago lost on their home court in Game 1, behind a brilliant performance from Sabrina Ionescu. In game 2, Copper and the Sky returned the favor, beating the Liberty by 38-points to get back on track.

Chicago had been shaky down the stretch, so it was good to see them rebound and force a game 3. Expect this to be a high scoring game tonight. New York is going to have to hit their 3’s to have a chance to knock out the defending champs. The Sky love to push the tempo, and New York isn’t going to be afraid to do the same. Look for a huge game out of Ionescu, as well as Candace Parker and Kahleah Copper.

The books haven’t really adjusted the lines at all in this series. However, it makes sense because of how completely differently Game 1 and Game 2 were from each other. Tonight’s line sits at 7.5, with Chicago favored, but the juice is on the Liberty’s side. The total is 165, which might be on the low side. The Sky are averaging 95.5 PPG in this series and there’s no reason they won’t put points up again tonight. New York has been able to score as well, putting up 98 in the first game. I like the over in tonight’s game at 165. Game 1 went way over that number, and Game 2 was real close despite it being a completely one-sided affair.

New York is going to try and replicate their 44% from deep in Game 1 to have a chance to win. However, they won’t shoot another 15% like in Game 2. Currently, on BetRivers, the over’s set at 165 (-109), it’s a good price and will provide good profit when it cashes.

My second favorite spot for this game is the first quarter. Chicago has won this quarter in both matchups this series, and we are getting a good number there. The Sky at -2 feels like a good spot. It’s a solid Wicked Wager to lay 1 possession with a team that is clearly better, more experienced, and ready to continue their playoff run. I also really like the 41.5-point total in the first quarter. This bet correlates with my full game play, and we are getting this number low.

Remember that despite that Game 1 performance, these are still the New York Liberty. They are still a team that finished under .500, and the Chicago Sky are the defending champs for a reason.

This series has surprised me, especially after the outcome of Game 1. The Sun crushed the Wings in Game 1, easily covering the spread and dominating in all aspects of the game. Well, Dallas had something to say about that in Game 2, completely flipping the script on the Sun. Dallas blew them out of the gym for 3 quarters. Dallas had a 31-point lead at one point and were able to secure a double-digit victory despite the Sun having a heck of a run in the 4th quarter. Let’s make no mistake about it. The Sun are the better team, with the better players, and they should win this series tonight. However, Dallas isn’t going to make it easy on them, and they will put up a good fight.

The books, specifically BetRivers, have adjusted their lines properly for tonight’s game. The Sun, who had been double digit favorites, are now only a 6.5 favorite tomorrow night. Expect this line to move leading up to the game, so get in on the action today. The line is short enough right now that it won’t get shorter. Especially considering the Sun are 12-6 on the road this year, and the Wings are under .500 at home. I like laying the 6.5 on the Sun for the full game, as they are the superior team.

The Sun also have the best player on the court in Jonquel Jones. Her dominance in the post, along with Connecticut’s balance on offense is enough to propel the Sun to victory and a cover. The total on this game is 164, and it’s too early to make a play on this. Expect this line to move up, which is what I want. The series has given us totals of 161 and 168, and I would love to see this number hit 166 or higher. In which case, play the under. I recommend waiting to see how the line moves tomorrow to make a play on that total.

I’m staying away from the first and second quarters. This may come as a surprise, but this game is going to be close in the first half. Expect the Sun to pull away in the second half as the better teams often do. To that end, my favorite Wicked Wager is the Suns -1 in the 3Q. This line works in bettors favor regardless of game flow. If the Sun are down at halftime, they will come out and catch up after their halftime adjustments. On the other hand, if they are up, they’ll put some space between themselves and the Wings in this quarter. Lay the 1 with the Sun there.

The Sun move onto the next round of the playoffs after tomorrow night.

Alert – Total Watch – If the Full Game total hits 166, Play the Under.