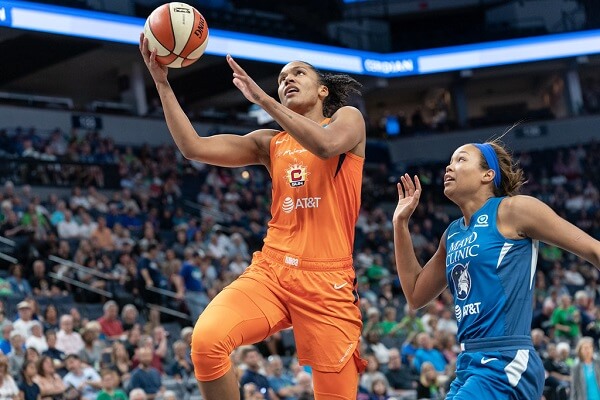 It’s not a matter of if, but rather when, the Las Vegas will be crowned WNBA champions this season. Las Vegas holds a commanding 2-0 lead over the Connecticut Sun. Incidentally, no team has ever come back from 0-2 to take the title. Connecticut certainly could be the first team to do this, but it’s very unlikely. Connecticut has had its success as a franchise, but it’s the Aces time now.

Becky Hammon, and the entire front office for the Aces have done an incredible job this year. Their title is going to be well deserved. All that said, the series isn’t over yet, and the Sun are a very good team. They will look to get into the win column tonight in front of their home fans.

Tonight’s game lines look much different than they have in the first two games. In the first two, we saw Las Vegas favored on their home court by 4.5-6.5 points before tip. Tonight, the Aces are merely 1-point favorites, with a sharp number on the total of 160. The spread on tonight’s game comes as no surprise. Vegas owned the first two games, but with their backs against the wall there’s value in betting against a sweep.

That’s going to start with the first quarter, where the Sun will have to come out and set the tone. BetRivers is giving plus money action on the first quarter spread, offering the Sun -1 at +100. For reference, the 1Q moneyline has the Sun -130. There is a ton of additional value in taking the Sun by a bucket.

Playing the 1Q -1 is my first Wicked Wager. I’m also playing the total in the first quarter, which sits at 40 points. Over two games, the average 1Q points are exactly 40. Since Vegas won’t slow down, and the Sun will come out firing on all cylinders, these teams will get over this number in the first quarter. In their lone win against the Aces this season, the Sun put up 37 first quarter points, so they’re capable.

The next Wicked Wager is the Sun in the second quarter. They have a deeper team than the Aces do and have been able to chip away at leads in both games so far. They even took a halftime lead in Game 1. Again, this is about desperation at this point. It’s also a way to hedge the first quarter bet in case the game flow is different than projected. Again, the Sun -1 at +100 makes a lot of sense here with their backs against the wall. Stay away from the full game line because it’s truly a coin flip. The Aces have been known to underperform in these situations, but I’m only banking on that in the first half.

For the rest of my Wicked Wagers tonight, let’s focus on player props. In case you’ve missed it, A’Ja Wilson, the league’s MVP, has been an absolute star in the playoffs. She had an incredible first half in Game 2, and the Sun haven’t been able to stop her. She is easily the best player on the court when she’s out there. Her points prop is 23.5, a number she has gone over in 2 straight, and 4 of her last 5. You must ride the hot hand, and Wilson has been on fire. Play the over tonight.

I am also all over Alyssa Thomas and her points prop tonight. Set at 14.5, that’s slightly under her series average of 16, and she gets there again tonight. Thomas has had a good matchup all series and she will exploit that again in Game 3.

Another player that will go over their points total is Jonquel Jones. Set at 15.5, the former MVP will have the weight of the world on her shoulders tonight, looking to avoid getting swept. Expect her to take control and force the action when she gets the ball in the post. She’s the best post player in this series and she will capitalize on that tonight. Take her points over as well.