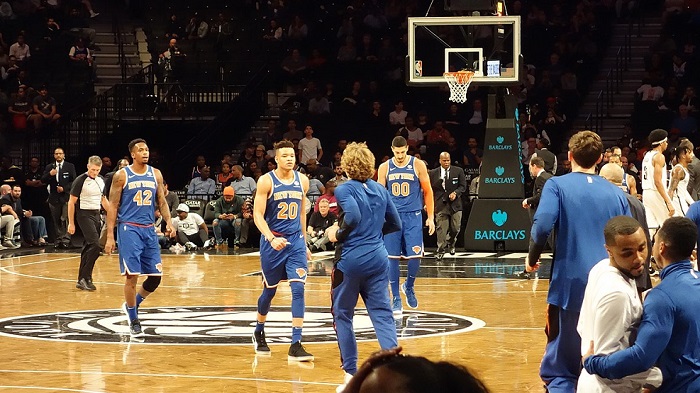 We’re halfway through the NBA season and playoff positioning is starting to take shape. Additionally, there has already been some prolific scoring performances in this season. We witnessed Luka Doncic go for 60 and Donovan Mitchell go for 71 not even a week later. Teams are averaging 113.8 points per game which would be the highest mark since the merger. Let’s have a look at what this all means, a few highlights of the season so far, and the updated NBA championship odds.

This next stretch of the 2022 basketball season is going to be quite interesting. For one, Lebron James will be going for the all-time scoring title, trying to top the legendary Kareem Abdul-Jabar. On top of that, there are talented teams that will be trying to avoid a play-in spot, or worse, missing the play in altogether. It will be a competitive second half of the season with the top teams in each conference separated by just a couple of games.

The Sudden Resurgence of the Nets and Lakers

The Lakers and Nets each came into last season with high expectations, and each of them failed – badly. Because of this, expectations for the two teams were much more tempered this season. After the Lakers started 2-10 and the Nets started 6-9, it looked like it was going to somehow be worse than last year. However, each team has turned things around, and the Nets even sit at 2nd place in the east.

Following a 12-game winning streak the Nets were able to climb all the way to the two seed in the Eastern Conference. Kevin Durant is playing at an MVP level. He is averaging nearly 30 points a game on a career best 55.9% from the field. However, Durant recently suffered a right knee sprain and will be sidelined for about a month.

Kyrie Irving has also had a good year and should help keep the Nets afloat while Durant is gone. He has averaged 26 points a game in the thirty games he’s played this year. The Nets are now 27-13 and will be a team that the rest of the east will be trying to avoid in the postseason.

In the Western conference, the Lakers looked dead in the water to start the year. The team hasn’t risen up the standings quite like the Nets have, but they’ve still had a surprising resurgence. After trending towards 50 loses this year, the Lakers now stand at 19-22. Anthony Davis was playing phenomenal basketball until he got hurt. Meanwhile, in his 20th season, Lebron James is just starting to heat up amid his push for the all-time scoring title.

If AD can return from injury and play together with Lebron for an extended period of time this year, the Lakers could find themselves in the playoff field.

The Kings weren’t supposed to do much this year after Sacramento missed the playoffs for their 16th straight season. Along the way they’ve battled team relocation while trying to keep their fanbase together.

The Kings have aggressively battled back after losing their first four games of the season. They now stand at 20-18, which puts them at the five seed in the Western Conference. They look like they’ll be able to shatter their projected win total of 33.5 games this year. If they keep it up we might be seeing playoff basketball return to Sacramento in 2022.

The Knicks have shown flashes of being a dangerous team through the early part of the season. They’ve struggled with consistency but have been better than bad in a year where there wasn’t a ton of excitement for Knicks basketball.

The team’s top free agent signing, Jalen Brunson, has adjusted seamlessly. Brunson is averaging nearly 21 points per game while shooting 38% from beyond the arch. Julius Randle has played in all the team’s games and is the Knicks leading scorer, averaging 24.4 points per game. The Knicks faithful are happy to see him return to his form of two years ago, after a disappointing 2021-2022 season.

The Knicks are currently winners of four out of their last five and now stand at 22-19. Despite being the 6th seed in the Eastern Conference, the team is tied for the 7th best point differential in the NBA. They’re tied in that regard with the Denver Nuggets, who are the top team in the west.

New York could be heading for a Knicks-Nets first round “subway” series. This playoff matchup would bring in tons of viewership and would be a huge New York City event.

The Minnesota Timberwolves headline our biggest disappointments at the halfway mark of the 2022-2023 season. After giving the Grizzlies trouble in the first round of the playoffs last year and making a big trade to acquire Rudy Gobert in the off-season it was expected that the T-Wolves would be better than they were last year. However, that has not been the case. Minnesota is now 20-21, which would get them the nine seed if the season ended today.

The Karl Anthony Towns-Rudy Gobert experiment has been dysfunctional at best. The Timberwolves traded five players and five draft picks for Gobert, a trade they thought would give them the edge over elite teams in the Western Conference. It’s easy to see but this has not been the case so far. While being great on the defensive end, Gobert is an offensive liability and has failed to adjust with his new team.

The Timberwolves were supposed to have the best frontcourt in the game in 2022. They do have a major size advantage with Towns and Gobert, yet as a team they rank 24th in the league in rebounding. This stat is concerning to say the least, especially after what they had to give up to create this pairing. There is still time for this team to figure it out, and they might be doing just that after winning four games in a row, following a six-game skid.

The Clippers were disappointingly bounced in the play-in last season. Paul George had to lead the way, while Kawhi Leonard recovered from a Torn ACL he suffered in the prior postseason. With Leonard healthy to begin the 2022-2023 season, the Clippers were supposed to be one of the most dangerous teams in the west.

So far in 2022, nothing has gone as expected for Tyronn Lue’s team. Kawhi has only played in 17 of the Clippers 41 games so far this year as he’s missed a couple stretches, nursing knee and ankle injuries. When in the lineup he’s been able to ramp up his performance, but the Clippers have still struggled to win consistently. They’ve lost six in a row and now stand at 21-21.

The Golden State Warriors are coming off their 4th championship with their current squad. It’s an aging group but there’s still a ton of talent on the floor. Stephen Curry, Klay Thompson, Draymond Green, and Jordan Poole headline a roster that is looking to repeat as world champs.

The Warriors are still that same offensive juggernaut but what’s been disappointing is their performance on the defensive end. The Warriors are giving up 117.5 points a game which is the most in the Steve Kerr era. After being the second-best team in the league last year in defensive efficiency the Warriors have fallen to 19th.

Losing Gary Payton Jr. has hurt this team. The son of Hall of Famer Gary Payton was key to the team’s championship success last season, often taking on the opposing team’s top scorer. The Warriors bench has added guys like Donte Divencenzo and Anthony Lamb, but the unit doesn’t seem to have the same defensive presence.

Much like the Clippers, the Warriors are still holding steady in the sportsbooks. The team has the 4th best odds to win the NBA Championship, at +900. They also have the best odds to come out of the west, at +400. They should be returning Stephen Curry from a shoulder injury sometime over the next week. His return to the lineup will be a spark for a team that needs to start playing more consistently on the defensive end.