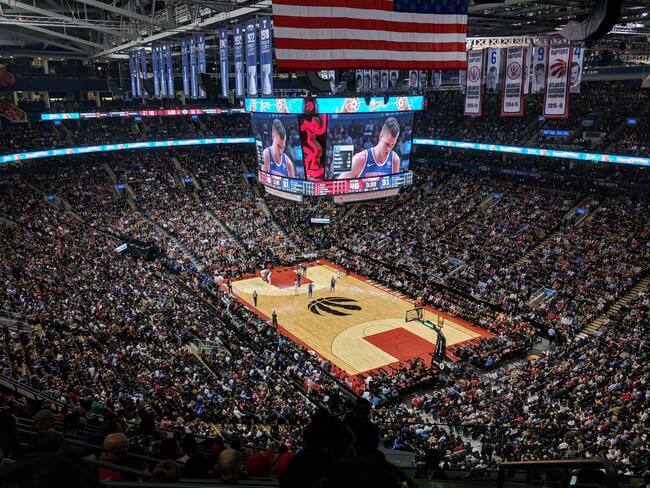 The NBA is mere days away from returning and the sport has been missed by the fans. Sure, MLB, WNBA, and the NFL are nice, but it feels like something is missing. While we wait for tip-off on the 18th, let’s look across the league and give our favorite NBA conference odds and full-season futures.

This NBA offseason was less splashy than anticipated. A few big names were on the move. Rudy Gobert to the T-Wolves and Donovan Mitchell to the Cavs were among them. Dejounte Murray to the Hawks was another huge move. The big names like Kevin Durant, Kyrie Irving, and Damion Lilliard all stayed put. Some of the more under-the-radar trades could end up having a huge impact. Malcolm Brogdon to the Celtics was one of them. Brogdon will make Boston even more dangerous when it comes time for the playoffs. Dallas hit big by trading for Christian Wood. Wood is ultra-talented and will provide rebounding and scoring to support Luka Doncic.

The Warriors are the defending NBA champions, and still have the guy by the name of Stephen Curry on their team. The Dubs will also be getting back their 7-foot center, James Wiseman. Wiseman adds a dimension to the Warriors that was sorely missed last year despite the team’s success. Kevon Looney stepped in masterfully, but Wiseman will be a welcome return to the lineup.

The Warriors have an excellent chance to win the West. The offense is going to score points and Steve Kerr knows how to get his guys to play team defense. Golden State is unique in today’s NBA in that they’ve managed to keep their core group together while setting up the next generation. Jordan Poole is one of those guys from the next generation and should take another step this year. The team will easily attain 50 wins, and the number should be closer to 55. From a betting perspective, at +333 there is plenty of value in betting on them to finish as the 1 seed.

This price is way too juicy to not throw a couple of bucks on it. The Grizzlies are coming off a terrific 2021-2022 season in which they lost to the eventual champs in the Western Conference Semifinals. If not for Ja Morant’s knee injury that forced him to miss time, Memphis could have won that series. The Grizzlies are physical, gritty, young, and exciting to watch.

Based on the first few preseason games this team already looks to be in full swing. One of the factors that drives this pick on them to win the West, is their win total projection. BetRivers has them at -121 to go over 48.5 wins this year. For a team that was last year’s #2 seed after winning 56 games, take the over 48.5 wins as one of our Wicked Wagers futures. I’ll be placing a wager on the +1000 to win the west–ride with me.

That number is where it is because of the Lakers and Clippers being “back”. It’s interesting that there’s such a gap between the three favored teams: Golden State, LA Clippers, and Phoenix to Memphis. Especially considering Memphis’ core is still intact. I’ll make my money back on the conference winner bet when my over 48.5 cashes, so it’s a nice way to parlay that success and hedge at the same time.

This is a fun team to watch. The addition of Rudy Gobert to this roster is big time for the Timberwolves. Gobert is a stud on the defensive end of the floor, winning multiple DPOYs over his career and anchoring the defensive end for a Jazz team that had plenty of regular-season success. Anthony Edwards and Karl Anthony Towns are still in Minnesota, which means this team will have a Big 3. Expect them to make big noise in the West this year. Good thing for us, the books are sleeping on the T-Wolves. They’re giving us a favorable number on their win total of 48.5, with -125 odds for them to hit the over. This team won 46 games last season and made some big moves over the off-season. I’ll be playing their over win total and sprinkling a bit on them to win the West.

Both teams in LA are going to be in the hunt, with the Clippers having the edge in southern California this year. Kahwi Leonard’s return, paired with a revitalized Paul George, could be dangerous this year. That being said, the Clippers are overvalued in the West. We haven’t seen them compete in 2 years, and +350 is a complete overreach by the books. The Clippers aren’t going to win the West. Period. Neither will the Lakers. While the Lake Show may look good on paper, Patrick Beverly and Russell Westbrook won’t play well together, and it’s anyone’s guess how many games Anthony Davis will play.

Elsewhere in the West, the Suns are a team to think about placing a wicked wager or 2 on. The Big 3 in Phoenix is legit, but the issue with Deandre Ayton and his head coach, combined with the turmoil surrounding their owner makes me want to stay away. Yes, they could very well win the West with their talented team, but I’m predicting regression out of them this year and will hold my money for better opportunities. Denver is another team to stay away from.

The Celtics were phenomenal last year and will be even better this time around. The additions of Malcolm Brogdon and Blake Griffin were enormous, and with the assets they gave up, it’s clear that the championship window is now. Both of these new players bring veteran experience and tenacity that will fit right in with this gritty Celtics squad. Jayson Tatum is my preseason pick for MVP, and the books have the Celtics at +600 to win it all, giving them the shortest odds in the league. The sportsbooks agree that the champ comes out of the East this year, with the two shortest odds each belonging to a team in this conference.

The pairing of Tatum and Jalen Brown makes for an elite 1-2 combo. Marcus Smart and Brogdon should bring offensive balance along with defensive intensity as well. They’ll also be able to spread things out, giving their playmakers opportunities to score. BetRivers has their win total listed at 53.5, which is a lot of wins in what’s expected to be a competitive division. Despite good things to come for this team I’m actually going to take the under on their win total. However, they can still win the conference with 50-51 wins. The teams in the East are going to be beating each other up all year, and the tough-minded Celtics could still very well end up on top.

Kevin Durant and Kyrie Irving are each back. Joe Harris should be ready to go and Ben Simmons is actually playing pretty well in preseason. You can say what you want about Simmons’ past, but this year he’s going to be making a big impact. The Nets got embarrassed in the playoffs last year after barely squeaking in. It’s unlikely the team will go through a season like that again. All of the Covid nonsense should be over with, so the Nets should have Kyrie for 85% of the season. Irvings over/under for mental health breaks this year should be .5, and I’m taking the over. He’s going to dip out on his team once this year, especially if they start losing.

With the talent on this squad, it’s hard not to think that they could in fact win the East. Basketball is the type of game where 1 player can take the game over without any help, and the Nets have 2 guys capable of doing so. I’ll be throwing a few bucks at the Nets because their talent is overwhelming.

Joel Embiid got robbed of MVP last season. There’s no other way to put it. The former Jayhawk is as dominant as they come in the NBA, being a true 2-way player and a stretch 5 that’s nearly impossible to match up with. The Sixers are deep and have the veteran experience that will carry them through the regular season. James Harden appears to care again. He looks fit and was able to restructure his contract this summer in order to give Philly the flexibility to keep their roster in good shape.

The 76ers won 51 games last year while missing Embiid for about 3 weeks. At +700, it’s too good of a price not to take. The Sixers window is closing, as Harden is past his prime, and Tyrese Maxey is still coming into his own. I’ve got Philly reaching 51 wins this year, which is over their win total prop of 50.5. 51 Wins will get them right in the mix for first place in the East.

The Bucks have talent, but they’re just not an attractive pick at +275 odds to win the East. Milwaukee made no significant changes to their team over the off-season, and are getting older. Giannis Antetokoumpo is a beast, but I just don’t feel good about them winning the conference. I’m staying away and going with deeper, more talented teams.