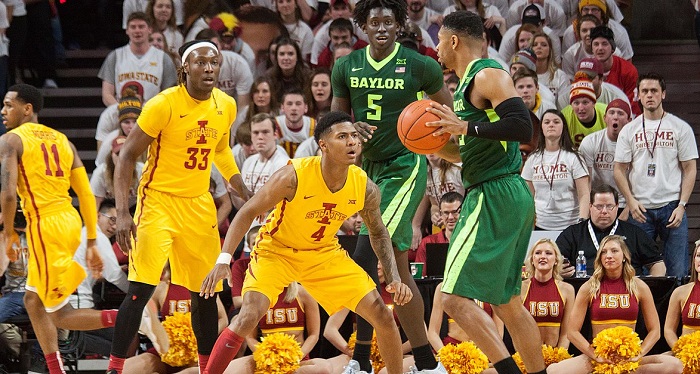 College basketball has started to replace football as the Saturday games to watch. One season winds down as the other ramps up. Every week during the college basketball season, we’ll provide the best CBB Saturday odds and picks.

Welcome to On the Docket: CBB Picks and Odds. Here, the Judge gives you his picks for the college basketball season. The number of gavels beside each pick equates to the number of units the Judge decrees. More gavels = more confidence. That means more times you get to scream “BANG!” when the bet hits.

Alabama hasn’t lost a game since December 17th and will put their resume on the line in Norman on Saturday. The Sooners have a streak of their own, but not the good time. Oklahoma will have their hands full if they want to end their three-game losing streak. The Tide have found success just about everywhere this year—at home, at a neutral site, on the road.  We’ll see more of that today.

A young, banged up Arkansas will go to Baylor trying to pick up a signature win against the heralded Bears program. The Hogs have won two straight and avoided a conference-play meltdown, but Baylor has looked strong as well, most recently picking up a win over Kansas. This comes down to Arkansas not having what it takes to pick up a road win in this spot, as they have yet to win a true road game this season.

The Bulldogs have had a tough go of it lately, losing 8 of their last 9. If you’re wearing your maroon-colored glasses, the last two games were close losses including taking Alabama to the wire in Tuscaloosa. That does matter because Mississippi State can build on that performance coming into their matchup against TCU, who just pieced together two stellar performances against Kansas and Oklahoma. Look for the home Bulldogs to make this one a mud fight and hang in until the very end.

Last year was the return of Rick Barnes to Austin. This year, the Vols will host the Longhorns in bit of a revenge game. We saw Tennessee struggle early in last year’s game before mounting a gigantic comeback but falling just short. Rick Barnes wants this one.  College Gameday is in town. There is a lot of emotion in Knoxville right now, which is why we are taking Texas and the points.

Keyontae Johnson thought he was getting away from the Gators when he transferred to play at Kansas State, but the forward will get to host his former team Saturday evening. The Wildcats have been a nightmare for Big 12 opponents and have showed no signs of dropping off.  Meanwhile, Florida is quietly building an impressive SEC record. However, Kansas State takes no prisoners in the Little Apple, and Florida will be no exception.

We get the main event Saturday night when Kentucky hosts Kansas. The Jayhawks have dropped three straight after starting the season 16-4. Kentucky, on the other hand, has picked up some momentum after four straight wins, starting with a win over Tennessee. This will be a fun one with clashing styles. Ultimately, Kentucky’s front court will be too much for Kansas.