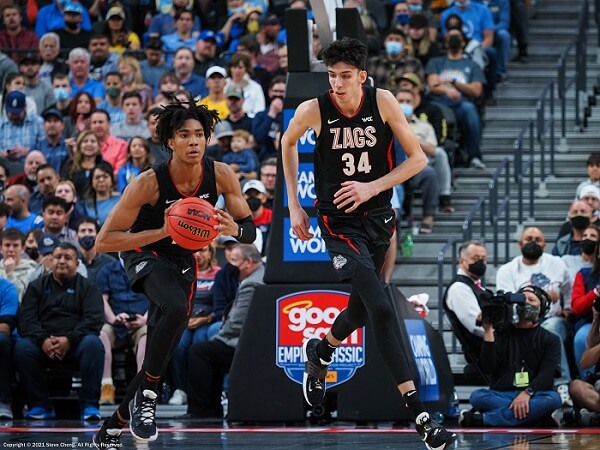 If you’ve been paying attention to the NBA off-season you would have heard that the 2022 second overall pick, Chet Holmgren, is out for the season. Holmgren’s absence will heavily affect the NBA Rookie of the Year award landscape.

The injury to his right foot occurred in a Pro Am game when Holmgren was guarding Lebron James. Holmgren contested a driving layup of Lebron’s and landed awkwardly. It was later announced that Holmgren suffered a Lisfranc injury and would miss the entire 2022-2023 season.

Holmgren had an impressive summer league, which made him a popular Rookie of the Year pick for bettors. They’ll now have to look elsewhere in this award race, but there’s still some impressive names. Let’s dive into Holmgren’s status and the updated NBA ROY odds.

The injury to Chet Holmgren occurred on August 20th at the CrawsOver Pro Am in Seattle, Washington. Holmgren appeared to come down wobbly after contesting a Lebron James layup, and eventually left the game. He was later ruled out for the season and underwent successful Lisfranc surgery on August 30th.

The injury came as a blow for everyone that was hoping to see the Oklahoma City Thunder compete this year. The team has been in rebuild mode for three seasons now but were hoping to see an uptick in the win column this year.

Last season at Gonzaga, Holmgren appeared in 32 games. The seven-foot center averaged 14 points a game, along with 3.7 blocks. His numbers were similar in summer league. In five games he averaged 14 points, 2.8 blocks, and shot an impressive 42 percent from beyond the arch. He looked like a guy with the ability to impact games at the next level. This injury means we won’t be seeing his impact in the NBA until the fall of 2023.

The funny thing is things may be working out well for the Thunder organization. The team reportedly wants to tank another season, with the hopes of winning the Victor Wembanyama sweepstakes. Wembanyama is an eighteen-year-old pro French player who looks like a lock to go number one in the 2023 draft. The Thunder will need the lottery balls to fall their way, but Wembanyama is a talent worth gambling for.

Holmgren and Wembanyama will be competing for the Rookie of the Year Award in the 2023-2024 season. This injury completely changes the NBA ROY odds.

Let’s take a look at the names best positioned to make a run at this year’s award.

Now that Holmgren is set to miss the entire season, Magic power forward Paolo Banchero is the favorite to win the Rookie of the Year Award. Banchero wasn’t expected to be the number one pick in the days leading up to the draft, but he was. The power forward was impressive last year at Duke, averaging seventeen a game on 48 percent shooting. He capped it off by leading his team to the Final Four.

He will now be the face of a young Magic team and one that has very little expectations.

Many thought the number one pick in the draft was going to be Jabari Smith. Smith displayed star potential last year at Auburn. He will now be playing under head coach Stephen Silas as the team hopes to develop its young players. Smith didn’t have the best summer league, which hurt the nineteen-year-olds NBA ROY odds. He is still set to be a key part of what the Rockets are trying to do moving forward.

The guy the Kings took with the fourth overall pick may be the most NBA ready. Keegan Murray was a standout last season at Iowa after coming off the bench his freshman year. Murray ended up taking home the MVP honors of summer league in Las Vegas. He ended the summer averaging 23 points on fifty percent shooting and forty percent from downtown. The Kings will be hoping their forward, who recently turned 22, will grow into the team’s franchise player.

The best longshot bet to win the Rookie of the Year Award is Nikola Jovic. The name probably sounds strangely familiar to most NBA fans. After all, it happens to be quite like the name of the back-to-back MVP, Nikola Jokic. The two have no relation to one another, except they’re both good at basketball. Jovic was the Heat’s first round pick in June and will be looking to get regular minutes on a team with title aspirations. Jovic showed off his potential in Summer League. In the team’s blowout win over the Warriors, he had 25 points and knocked down five threes. Jovic can score from anywhere on the court, making him an appealing long shot pick for NBA ROY.

Keegan Murray is not only the best bet to win the Rookie of the Year Award, but I also put him as my favorite. Murray has played great basketball over the last twelve months, at Iowa and in the Summer League. He’s a guy that could end up handling the ball a lot for the Kings this year. The team will be hoping Murray can take them to the playoffs for the first time since 2006. It may not happen this year but look for Murray to be a guy that can lead this franchise forward.

Since Chet Holmgren’s injury is set to sideline him for the year, Murray’s biggest competitor will likely be Paolo Banchero. Banchero will have a big role with the Magic this year, as any first overall pick typically does. However, Murray is a more experienced and developed player. Having more reps in college helps players as they make the transition into the NBA. Expect that to show in this award race between Murray and Banchero.