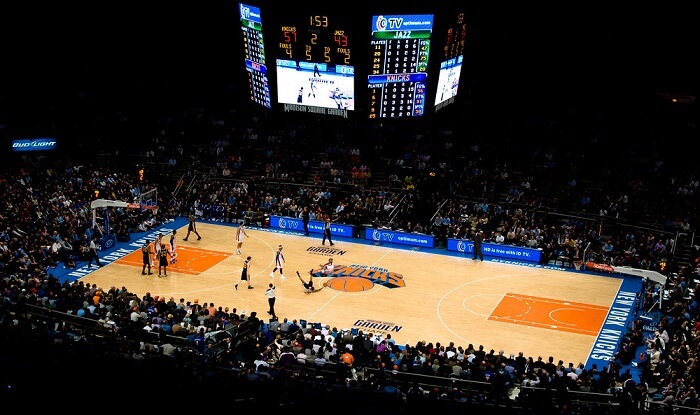 The NBA never disappoints on Christmas Day and 2022 is no different as we have a full lineup of crucial matchups. Only two teams playing on Sunday are not currently in playoff position, and while the season is still young, any of these games could be a conference finals preview. Let’s dive into a full breakdown of each game on the Sunday NBA slate, and our NBA picks Christmas Day.

The 76ers will be coming into this one riding a 7-game winning streak. This hot stretch has brought them to the 5th seed in the east, just ahead of the Knicks. The Knicks on the other hand have lost two in a row after posting an 8-game winning streak. They’ve managed to successfully integrate their top free agent signing, Jalen Brunson, into their young squad this season. They’ll be looking to contain the talented Joel Embiid on Christmas afternoon and get a win in the process.

A key matchup to watch will be how the Knicks, a team that allows 47 points per game in the paint, can contain a paint player like Embiid. The Knicks bigger players will have to play him tight and not allow too many inside shots.

The Lakers are coming off the devastating news of losing Anthony Davis indefinitely. That means Lebron James will be tasked with solely carrying the team for the time being. So what else is new. The Lakers will need to be worried about where their scoring will come from, especially since they already rank 24th in offensive production.

Luka Doncic’s isolation basketball have proven wonders for the Slovenian prodigy in the personal stat sheet. However, Mavs fans would like to see more green in the win column. The Mavs currently hold the 8th spot in the West and will be looking to take advantage of a sluggish Lakers team later today at American Airlines Center.

The highlight of the Christmas slate will be the top two teams in the Eastern Conference squaring off in Boston. The Bucks recently slid to the two spot. Additionally, they will be looking to get revenge on a Celtics team that got the better of them in last year’s playoffs. Boston holds just a one game lead over the Bucks and Cavs, this is a must win if they want to hold that spot.

Giannis Antetokoumpo and Jayston Tatum are currently the co-favorites for the MVP award (+275). Expect the ball to be in the hands of each of these guys as they duel it out for the top spot in the East. This game could end up being a difference maker for tiebreaker purposes down the stretch.

The Golden State Warriors will be without Stephen Curry. The future Hall of Famer is nursing a shoulder injury that will sideline him into the new year. Even with Curry out there, the Warriors have been a mess on the defensive end this year. That is something that’s been uncommon during their dynastic run. They will need to play together as a unit on Sunday if they have any hope of stopping the top five Memphis defense.

Meanwhile, the Grizzlies are tied atop the West standings. They’ve been led by the efficient scoring of Ja Morant and Desmond Bane. This game will be the first time the two teams have met since the Western Conference Semifinals last year. If you remember how that series ended, then you know Memphis is out for blood. You can bet this matchup will be a good one.

The Christmas nightcap will feature two of the top teams in the Western Conference. The Denver Nuggets will be riding a three game winning streak heading into their matchup with the Suns. Reigning back-to-back MVP Nikola Jokic is nearly averaging a triple double on the season. Additionally, having Jamal Murray back in the lineup has helped the team win more games.

The Suns are a serious threat in the Western Conference and will be looking to prove that on national television. Expect Devon Booker to come out firing on Sunday night.

Both these teams are top ten in both offensive and defensive production. Considering that, it will be the team that players a cleaner game that will come away with the win.