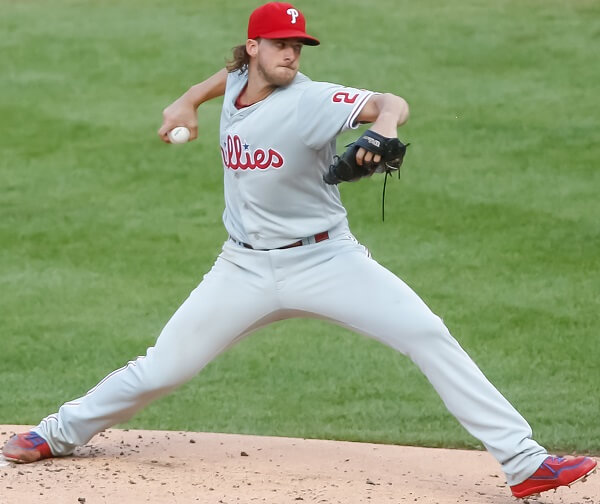 The two National League Wild Card Series went just as planned, not! The Philadelphia Phillies swept the St. Louis Cardinals, and the San Diego Padres defeated the New York Mets in 3 games. Both lower seeded teams advanced to the Division Series. Philadelphia will play the Braves and the Padres will face the Dodgers. Let’s dive into this full NLDS series preview.

Philadelphia was down 2-0 for most of game 1 and looked like they would lose. However, they started a huge rally late in the game which resulted in a 6-run top of the 9th inning. Late game heroics weren’t needed in the 2nd game of the series. Aaron Nola was simply dominant, and he shut out the Cardinals offense for 6 ⅔ innings. The bullpen did their job and finished the game without allowing a run.

It was a collapse of epic proportions by the New York Mets. They were one of the best teams in the NL, winning 101 games this season. However, the regular season does not matter anymore. They came out completely flat, and Max Scherzer was throwing batting practice in game 1. He gave up 4 home runs to San Diego and New York lost 7-1. Game 2 went the Mets way as they answered back to even the series. Game 3 was as lopsided as the 1st game, without all the homeruns. The Mets looked sloppy, uninterested, and were flat-out outplayed by the Padres.

The National League Division Series begins on Tuesday, and unlike the Wildcard round, this is a 5-game series. It’s a 2-2-1 format for the NLDS with two games at the higher seeded home stadium then a travel day. The lower seed will then play two games at their home stadium. If a 5th game is needed, teams will get another travel day and the final game will be played at the higher seeded stadium.

In the baseball playoffs, the seedings do not reset, which means the Philadelphia Phillies will remain the 6th-seeded team. They travel to Atlanta and face a team who finished the year strong. Atlanta didn’t lead their division until the last week of the season. Philadelphia did a great job at neutralizing their opponent in the Wildcard series. Nolan Arenado and Paul Goldschmidt are two of the best hitters in the NL, but the Phillies pitching kept them quiet. Their pitching only allowed 2 runs in the first game, and that was it. A masterful performance by Aaron Nola helped Philadelphia advance and keep their playoff hopes alive.

It seemed like the postseason hangover was real for the Braves. two months into the season, it looked like they were dead in the water. At one point this season, they trailed the division leader by more than ten games. However, right before Ronald Acuna Jr. came back from the Injured List, they managed to flip a switch. The Braves from 2021 had finally shown up. Now they’re back in the postseason and looking like the 2nd best team in the National League. It’s a crazy thought, considering how good they were, but this year’s club might be better than last year’s.

Only games 1 and 2 have set times for the NLDS. The MLB is very, “we’ll figure it out if/when we get there” about the postseason schedule. We will also update the starters as teams announce them.

Game 4 (if necessary) – Saturday at TBD

Game 5 (if necessary) – Sunday at TBD

Philadelphia shocked the baseball world by making such quick work of the Cardinals, but the Braves are seemingly in a different league when it comes to talent. With the Cardinals, if you could stop Arenado and Goldschmidt from hurting you, you’re in the clear. But Atlanta is much more balanced top to bottom than the Cards. Almost everyone in their lineup has the power to make you pay, and they have a great pitching rotation. Their bullpen is solid, and after some mid-season hiccups, closer Kenley Jansen has been elite. The Phillies might take a game, but I think the Braves are head and shoulders better than their opponents this round.

To say San Diego stunned New York in the 1st round of the playoffs would be an understatement. The Padres looked like they were the 100-win team. In the two games that they won; they simply outclassed the Mets. They played with energy and swagger that will absolutely carry over into this series against Los Angeles.

On Friday night, the Padres shelled Max Scherzer and scored 7 total runs by the way of 4 home runs. On Sunday, they scored 6 total runs, but no homeruns were hit. Why is this a big deal? Because their offense showed that they can produce runs by both hitting the long ball and stringing together hits. In game 3, their pitching staff didn’t allow a single run. Not to mention, in both wins, their rotation and bullpen were stout. Yu Darvish pitched a gem on Friday night, and Joe Musgrove was phenomenal, tossing a 7-inning shutout.

Los Angeles won a franchise record 111 games this season. They were the best team in the league all season, save one rocky month. For a while, it seemed like every other week, a starting pitcher would take a trip to the IL. Every starter in their rotation except for Julio Urias spent time injured, and they even lost Walker Buehler entirely. It didn’t matter, though. The Dodgers still had the highest run differential in all of baseball. Closer Craig Kimbrel was unreliable throughout the year. A few weeks ago, manager Dave Roberts announced that there are no longer ‘defined roles’ for their bullpen. This is a great move on the managers part because simply whoever has the hot hand will close out games.

Game 4 (if necessary) – Saturday at TBD

Game 5 (if necessary) – Sunday at TBD

Los Angeles vs San Diego in prime time is a series every baseball fan should be looking forward to. For as long as I can remember, the Padres have always been that little brother who lives in their older brother’s shadow.  But will it be different this year? Even though I see this series going all 5 games, I don’t think so. The Dodgers have the best lineup out of any of the teams left in the postseason and it’s not close. The starting rotations between the two are very evenly matched, and there’s no doubt that there will be some low scoring games. But it just takes that 1 player to come up with that 1 hit, and Mookie Betts is the deciding factor that tips the scale in this series. He’s electrifying on defense and offensively, he’s as good as anyone else at the plate.