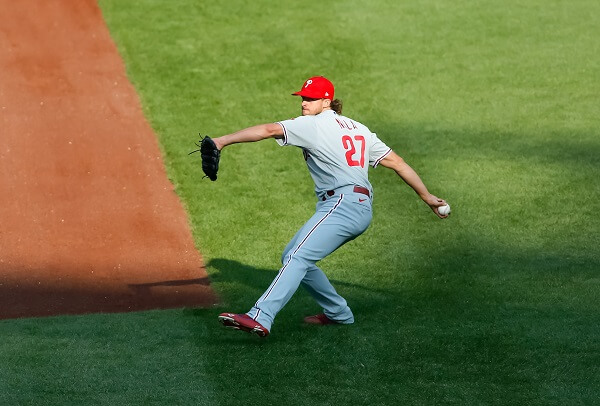 The National League Postseason bracket is all set. The Dodgers are the 1 seed, while the Braves are the 2 seed, granting each of these teams a first-round bye. It’s the first year of the new baseball playoff format so we’ll have several best-of-3s to play before we see either of these top two teams in action. The Dodgers will play the winner of the Mets-Padres series and the Braves will play whoever comes out of the Phillies-Cardinals series. This is bound to be an exciting National League Wildcard round.

All games in the wild card round will be played at the team with the better regular season record’s home ballpark. Let’s take a look at what’s in store in the National League as we kick off the postseason.

In this series, the 6-seeded Philadelphia Phillies travel to St. Louis to play the 3-seeded Cardinals. Each team has had an interesting story on their way to the postseason. The Phillies had to fire their manager earlier in the year. After the firing, the team turned it around and fought their way back to .500. A roller coaster of a year has seen the team fight through rough patches, but they were able to play well enough to earn the final Wild Card spot.

St. Louis on the other hand was in the running for the division lead for most of the season. They battled with the Milwaukee Brewers for the better part of the year but were able to outlast their division rivals and finish with a comfortable lead as NL Central Champions. The Cardinals are an all-around better team than the Phillies. They feature the best corner duo in baseball. Third baseman Nolan Arenado had yet another outstanding season, while first baseman Paul Goldschmidt is set to be crowned the National League’s Most Valuable Player.

If you follow baseball, you know the season is long and arduous. It’s a game of streaks. Neither of these teams finished how they’d like to have, both going 4-6 over their last 10 games. The rosters and records show the Cardinals have the better team, but Philadelphia actually won 4 of 7 against St Louis this year.

The 4th-seeded New York Mets led their division for almost the entirety of the season. A slow start from the Braves allowed New York to rack up a double-digit game lead in the division. The Braves were able to persevere, and in the final week of the regular season, they took the division lead by sweeping the Mets. Now, the Mets must play in the Wild Card round against a hungry Padres team.

The San Diego Padres, entering as the 5th seed, has one of the better starting rotations in the league, and in a 3-game series, they won’t be holding back with their rotation. It’d be surprising if we don’t see starting pitchers in relief roles at some point in the series for the Padres. They made the biggest splash at the trade deadline with the acquisition of Juan Soto, but the team struggled to accumulate wins thereafter. Soto struggled with his new team, but that will all be forgotten with a couple of home runs off one of the Mets many aces.

This series is going to come down to the wire. Sure, the New York Mets have a much better regular season record, but none of that matters now. One of the Padres weaknesses is their bullpen. The nice thing for San Diego in a 3-game series is that they can use their abundance of starting pitchers to make up for their lack of relief pitching. If the starters can handle the added pressure, this will be huge for the Padres chance of winning the series. New York has two of the best starters in the NL. Even though San Diego has a great rotation, none of them can match up with Jacob deGrom and Max Scherzer.

Buck Showalter looks to be taking a huge risk by not starting deGrom until his team faces elimination. This means we’ll be seeing Chris Bassitt in Game 2 if the Mets win Game 1. The Mets offense has proven to be more consistent than the Padres, which is why I’m ultimately going with New York to advance and face the Dodgers.