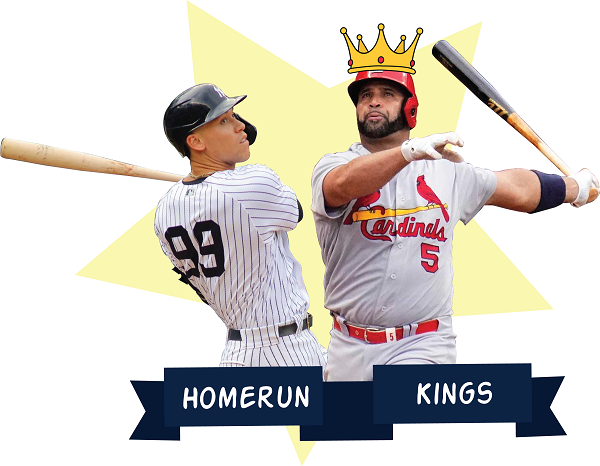 The biggest story of the final three weeks of the MLB season isn’t the division or wild card races. It’s the home run record chases that Albert Pujols and Aaron Judge are on. Both players will be trying to make history between now and when the regular season ends on October 5th.

Albert Pujols is three home runs away from 700 for his career. It’s a milestone that only three players have reached since Major League Baseball officially merged in 1903. Yankees star Aaron Judge is sitting at 57 homers for the year. He’ll be trying to surpass Robert Maris’ single-season mark of 61, set in 1961. Maris holds the Yankees single-season home run record. If Judge reaches 60 home runs it will be the first time its happened since 2001 when Sammy Sosa and Barry Bonds each accomplished the feat.

What Albert Pujols is attempting to accomplish would have seemed improbable, if not impossible from the beginning of the season until August. Suddenly, Pujols heated up and is now on the doorstep of history. He’s hit 11 home runs since August 10th and hasn’t even been in the lineup every day.

Pujols’ hot stretch is a reminder of what he was capable of while playing for the Cardinals from 2001-2011. He was top 5 in MVP voting for 10 of those 11 seasons and won the award three times. Pujols went to the Angels following the 2011 season and wasn’t the same player. He was still a productive hitter but a shell of his former self, only making one all-star appearance. Pujols didn’t have nearly the same amount of team success in Anaheim either. In St Louis, He made the playoffs in 7 of 11 seasons and won the World Series twice. While with the Angels he only made the playoffs once, getting swept in the first round in 2014.

Pujols has managed to recapture some of his magic from his glory days, in fitting fashion as he does it in his farewell season in St Louis. The Cardinals Hall of Famer has repeatedly said that he will be retiring at the end of the season regardless of what his home run total is. Pujols making this statement is respectable, and it makes the chase even more exciting as he tries to make history in his team’s final 19 games.

FanDuel has odds up for whether or not Pujols will reach the historic milestone. After he recently homered in back-to-back games over the weekend to get to 697 it was the first time we saw his odds in minus money. You can take Pujols to reach 700 career home runs for -188 odds. His odds have increased over the past couple of days despite Pujols not hitting any home runs. This means that FanDuel is getting a lot of bets coming in on Pujols making history, so they’re trying to level this wager out.

The Cardinals will begin a 5 game home set tonight vs the Reds. After that, they will only be back in St Louis for one more series before finishing the year in Pittsburgh. If Pujols is able to accomplish the historical feat it’s unknown where he’ll do it. 700 at Busch Stadium is the legendary moment people have in mind.

How Many Will Judge Hit?

Aaron Judge is putting together an all-time great season for the Yankees this year. At 57 home runs, Judge is on pace to surpass Roger Maris’ Yankee single-season home run record. Judge has been the most prolific power hitter by far in the MLB this year. Kyle Schwarber, who is second in the league in home runs this year, has 20 less than Judge.

At this point in the season teams aren’t pitching to Judge. He only sees a couple of good pitches to hit in every game, so he’s tasked with making the most of those opportunities. Yankees manager Aaron Boone has used Judge in different parts of the lineup this year. Most recently, Judge has been used at the top of the lineup, which is unusual for someone with his power talents.

Prior to his two-homer night at Fenway on Tuesday, Judge was on a 5 game homer-less streak. He’ll have to avoid those kinds of stretches to maximize his homer potential. Even when he’s not homering, the right fielder was still extremely productive at the plate. During his 5-game homer-less stretch, Judge went 8 for 18 with 5 walks. Prior to that stretch, Judge had homered in 4 consecutive games.

Judge’s Yankees will now head to Milwaukee for a 3-game stretch with the Brewers, before returning to New York for a 6-game home stand. With 19 games left in the season, it will be critical for the Yankee star to keep his power numbers up the rest of the way.

Judge would say he’s not concerned about the Yankee record, but for all those that are you can head over to FanDuel to take him to break the Yankee single-season home run record for -355 odds. After his two home run performance in Boston, the other night Judge’s odds to make Yankee history shot up from -144. It was Judge’s first multi-home run game since July 29th. His current odds don’t give great value to betters, but it could still be worth placing the over bet since Judge looks like a lock to make Yankee history. Tune in this weekend to see if Judge can give the fans of Milwaukee a couple souvenirs.

How Historic Is This?

We haven’t seen someone approach the 700 home run mark since Alex Rodriguez approached the historic milestone in 2016. He ended up retiring during the 2016 season after becoming ineffective at the plate. A-Rod finished at 696, a number Pujols was able to surpass on Sunday. The last time we saw someone reach 700 was when Barry Bonds did it in September of 2004. The race is on, and with the Cardinals leading the division by 8 games with 19 left, It’s time for Cardinals manager Oliver Marmol to start penciling Pujols into the lineup every day.

Judge could become only the fifth player ever to reach 60 home runs for a season. The last player to approach this number was his current teammate Giancarlo Stanton, who hit 59 in 2017. Yankee legend Babe Ruth was only able to do it once. That was when he hit 60 in 1927. Barry Bonds, Sammy Sosa, and Mark McGwire were able to reach the single-season milestone during the steroid era. Both players were accused of using PEDs in their playing days, taking away from their accomplishments. Judge will be attempting to do something historic, in what’s been a historic year for the Yankee outfielder.

There’s a lot to be excited about down the stretch in this MLB season. Playoff spots are up for grabs, and the home run records for Albert Pujols and Aaron Judge is unlike anything we’ve ever seen.