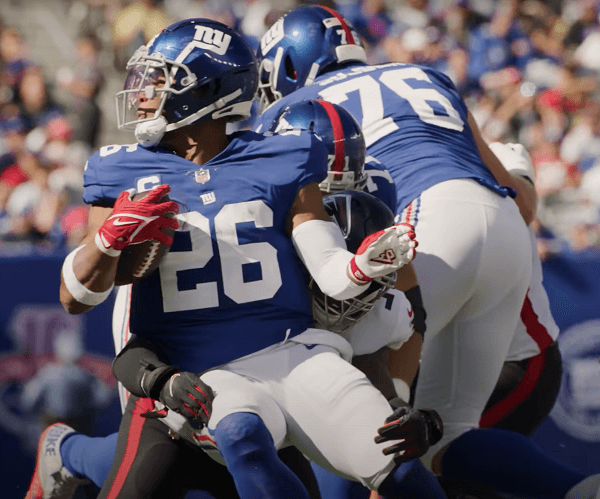 Week 1 of the NFL season is in the books, and it was quite the first week. We saw a tremendous mix of players we expected to ball out, like Justin Jefferson and AJ Brown. These were combined with performances like that of Saquan Barkley who reminded us of who he is on the field. Let’s dive into our NFL Week 2 Player Props.

Like any football weekend, NFL week 1 was filled with high points and disappointments as well (looking at you Indy). Things will settle into place this week, and with that, here are the best player props of the week.

I was on this number last week, and I’m on it again this week. The Browns are going to rely on their running game while Jacoby Brissett is under center. They must. Lucky for them, Cleveland has one of the best 1-2 punches at running back in the league.

Chubb got 22 carries which he converted into 141 yards. This week the Browns play the Jets, and you can expect more of the same out of Chubb. The Jets were able to hold the Ravens to 63 rushing yards last week. However, that was due to the lack of RB’s available for the Ravens, not because the Jets were stout defensively. The Browns are committed to protecting their backup quarterback and will lean heavily on Chubb and Hunt to carry the load, literally.

Last week I wrote that Chubb would do most of the work, and Hunt would reap the end zone benefits. That’s exactly what happened. This week, it’s Chubb’s turn. He will get at least 17 carries; 81 yards and he will score this week. A parlay on all 3 of these pays about 3-1 and is a good correlating bet to make. You’re obviously starting him in your season long fantasy leagues, and he’s got good value in DFS. He’s got a price of around $7,100 depending on your site. DraftKings price of $7,100 is telling us that they think his floor is 14 points, or 2x his cost. He gets there with 80 yards and a score, making this all the more appealing.

Barkley has been getting a ton of hype this week, and rightfully so. After his 164-yard rushing performance last Sunday, leading to a surprising victory over the Titans, all aboard the Barkley train. The Giants O-Line looked good against a defense that is in the top half of the league. The Giants will rely heavily on their star running back, because they can’t rely on Danny Dimes to carry the load. This is Barkley’s year if he can stay healthy, and he gets a great matchup at home in week 2.

The Panthers come to MetLife this week, coming off a game where they gave up 217 yards on the ground. Expect more of the same this week, with the Giants having an opportunity to rack up yards on the ground. This gives us an even better opportunity to cash this ticket. Barkley’s rushing total of 77.5 feels low considering how week 1 went. Expect him to eclipse this number in week 2.

He is the 4th most expensive running back in DFS this week, which is a good indicator that he is expected to put up numbers. I’m grabbing this number Saturday and would play it all the way up to 89.5 with confidence.

FanDuel has a special for Jonathan Taylor, Saquan Barkley, and Nick Chubb to all rush for over 100 yards (+600). That’s a fun prop parlay to get in on, and it’s got a great chance at cashing!

Week 1 didn’t go so well for Kyler Murray and the Arizona Cardinals. It’s not going to get any easier on the road this week against the Las Vegas Raiders. Murray looked particularly bad in Week 1, and aside from 1 scramble for 21 yards, didn’t do much running. His team was playing catchup the entire game and he needed to throw the ball often.

This week, look for that to change. Kyler is an electric runner and is going to feel the pressure to play better football this week. The Cards certainly don’t want to start 0-2, and a win starts with their quarterback. The Raiders didn’t give up a ton of yards last week, relinquishing just 102 yards on 22 carries. However, running the ball isn’t the Chargers game, and it is the Cardinals game. Expect more designed runs, and quicker reactions out of Kyler this week pushing him to 30 rushing yards easily. He got to 29 last week in a poor performance, and he will get to 30 this week as he bounces back.

Play the over and cash the ticket.

This one is simple. Tyler Boyd has gone over this total 35 of 49 times since 2019. That’s very consistent, and a lot of data to look back on. With Tee Higgins questionable, and Jamar Chase getting number 1 wide receiver attention, take the over on a number that has hit 71% over the last 3 seasons.

If Higgins is out, this is a no brainer. Grab this number now, because if Higgins is ruled out, expect this to jump to 4.5.

Here are the guys on my radar to score TD’s this week:

DJ Chark: Goff looked his way 8 times in week 1, and they connected for a TD. Washington is more vulnerable in the passing game and Chark scores for the 2nd week in a row.

Patriots Backfield: Both Stephenson +175 and Harris +133 will score this week. The Pats are going to have to take control of this game and lean on their running game to get it done. The backfield gets them in the win column.

Christian McCaffrey: 2+ Touchdowns. Last week my 2-touchdown play was my longshot of the week, but CMC has much shorter odds to score twice at +440. The Panthers will increase his usage out of the backfield, and he’ll score on the ground and through the air this week.

Lamar Jackson: Miami blitzed Jackson out of the secondary more than anyone last year. Due to that he’s going to have a chance to beat the secondary in his own backfield and have a good day on the ground. With their running back situation still unclear, Jackson will get a few opportunities to run one into the endzone.